In play - in firstness - things are sensed and experienced within the time play occurs. Experimentation with and exploration of things become logical events which exist per se, irrespective of what the person-at-play thinks of them. Events, things and instruments are treated mechanically and are thought of as if they were governed by real laws, even when these laws have unknown causes. 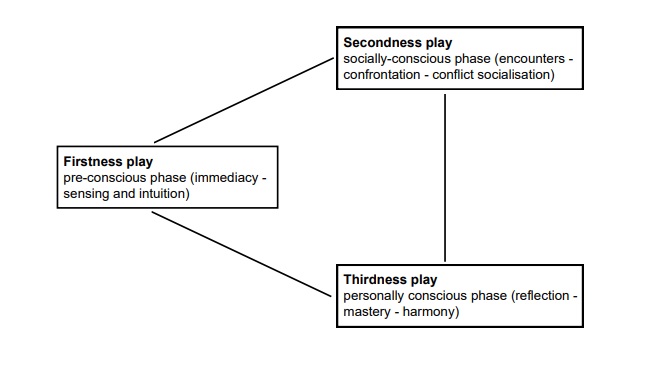 Firstness play - has many existential and expressive forms which for the most part are unconscious. These are first and foremost the child’s early play as the infant does not gain an ego-consciousness until the age of 3. Until then, the child is one with his mother (or the person who looks after the child), one with “his gods” whose messages and reactions dominate the child’s entire life, decisive for situations and episodes of daily life which include the whole environment.

Firstness play is, however, also the older child’s and the adult-at-play’s spontaneous way of acting and reacting on sensations, intuition and “inner voices”.

Play in firstness is simply participation or execution without a specific reason for why one plays or participates, with no special or particular intention either to fulfil special needs or to attain personal gratification.

The person-at-play knows precisely what events (encounters) are - but never really knows when or in what order they will occur, nor is he able to give an exact description of the laws which govern them or give a logical explanation for what happens.

Secondness play is the great personal or existential moments when, through play, action or the encounter with another person or thing, the person-at-play is confronted with aspects of himself and the other party which correspond and therefore strengthen his understanding, confirmation, openness and self reflection. Social consciousness is created in secondness play.

The person-at-play will then normally regress to firstness play, partly because it takes time to adjust to the encounter, partly because understanding, confirmation and recognition of new openness demand a long time for reflection, experimentation and experience with the newly acquired recognition and cognition. Development in play possibly continues into thirdness.

The transition to thirdness’ legality concerning the event which has occurred (encounter) consists of the possibility of foreseeing that someone or something will, under certain thinkable circumstances, behave in a certain way.

The ego-consciousness, the way in which to behave, will bear the mark of self-awareness.

Thirdness play is characterised by personal consciousness, harmony and balance, totality and mastery of situations and episodes, instruments and objects. The person-at-play evaluates and reflects on his surroundings harmoniously and solidly, puts his knowledge on public exhibition and manifests understanding, tolerance and openness (often built on a creative and deeply personal foundation) to his surroundings.

Thirdness play (which in itself is something divine) does not occur very often but is on the other hand very easy to spot!