There are clear case relations of play ideology connected to communication in the game.

It is the transition between the different dimensions (pairs of opposites) in the game which generates excitement and the often incomprehensible irrationality which also generates the energy and the intellect with which to build rationality, order and strategy which in turn ensure that there is content and form.

There are vast differences in the various life styles as to how the different games are played and evaluated. In addition, there are also differences as to which activities are characterised as games.

Even attitudes to what is rational/irrational, useful/useless, female/male in society are different. Certain games are idealised because they are part and parcel of the ideology of the society and are thus given to be healthy and reasonable. Other games are characterised as unreasonable, immoral or destructive.

The kinds of games which are regarded as suitable relative to children’s upbringing and development have changed with the times. We see this in changing attitudes to play and games as described in many childhood biographies.

The idealisation of the game is dependent on the number of ideological dimensions which in any given situation are placed in theories and studies of play and games. There is, however, widespread agreement that games manifest restraint but it is restraint of a voluntary kind - where play manifests freedom.

If, however, force intervenes in a game and sets fixed targets for the development of the game, its progress and result, the spontaneity of the game disappears. And it doesn’t matter whether the game is educational or fun or similar, the play element of the game has ceased to exist.

That there must be an aim to children’s games so that they learn something through play is a widespread idea in the Western cultures. Characteristic for both artificially produced toy products and sports equipment is that they are intended to stimulate children physically and psychologically. Play areas or sports fields must, however, always be regarded as artificial environments.

Freedom is therefore not a characteristic of games in any form of universal perspective.

Where freedom in modern childhood is concerned, seen in the light of developments over the past century, organised institutions, schools, (voluntary) clubs, sports and TV have taken over more and more of the children’s free possibilities for play and games.

Despite the fact that parents, teachers and pedagogues idealise free possibilities for play and games, the focus is drawn away from them by the amount of time children spend in institutions with obligatory stimulation programmes and “educational” toys and with games reduced to a kind of occupational therapy, often a case of getting the children to pass the time in an easy way.

How much opportunity do children really have for voluntarily experience of the free, natural and self-made play and game processes in addition to the organised forms of play/games? The correct answer to this question is another question: How does society want to administer and disseminate freedom?

It is important to note that NONE of the concepts featured in the model are static in relation to any of the other concepts.

Their respective positions crystallise according to where (the circumstances) and how (the ways in which) the concepts originate and react within play.

Play with a toy, play itself or playing a game are “unique” - because play occurs, progresses and dies never to be played again. Whenever a game is repeated, it is a new game in which all the constituent concepts are dynamically re-mixed. New dynamic structures appear all the time. The sheer numbers of variables means that it is both wrong and impossible to say much about play or a game in advance. Every individual game must be explained by the forms it assumes.

The Game - and the Player

The external margins for the eco-social environment are on 8 levels: 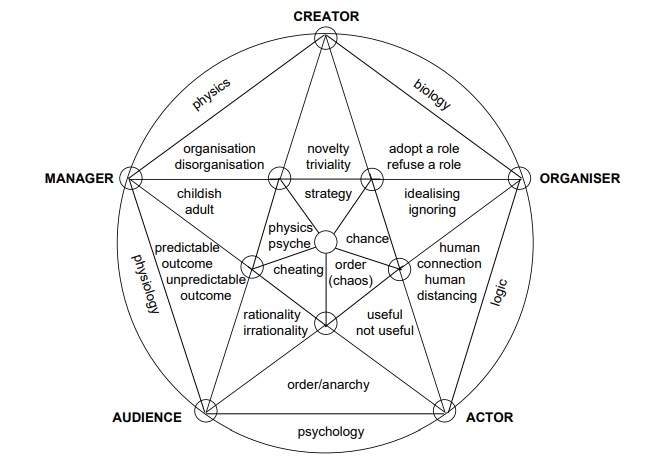 The core of the text (and poetic function)