Play/games and possibilities with toys hang literally like planets in the universe (the universal environment) and are subject to the different, random variation in conditions around them.

A game is an exercise in voluntary control systems in which there is a mutual competition between the power and energies of the players, limited and controlled by the rules of the game, the objective being to achieve an unequal result.

This is in fact the decisive difference between the practised/trained and unpractised/untrained persons in relation to the question of mastering a game.

It is difficult to compare and distinguish the similarities between play and games but there are two areas in which they differ i.e. a) the limitation in the game due to rules, time and space and b) the attempt in the game to identify a winner.

More precisely, the differences between play and games, sport and competitive sport can be compared thus: 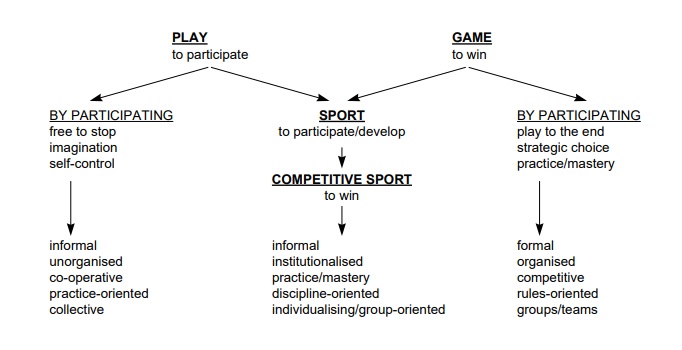 All games simulate a “reality” of some kind, type or description. Games have marginal assumptions which consist of eight levels:

The game and its players

Over the years, many attempts have been made to construct classification systems for types of games. This is difficult and has yet to be achieved with complete success.

Sutton-Smith (1978) states that the reason for this is the relativistic motivation that when a game is played, it represents an incredibly large number of strategies and cultural expressions.

The many and varied types of games refer to a broad variety of traditions which again are rooted in different economic, technical, political and sociological principles and their development.

Attitudes, concepts and ideas which lie behind these are ideologically oriented, he says. In addition, the way the game is played is also affected by age, gender, experience and aptitudes/pre-disposition for the finer points of the game and other special abilities.

As a game is always regarded and interpreted from an ideological point of view, a game’s ideology can be described as:

The finer points of a game and special aspects, rules and qualities can very reasonably be called the game’s ideological being.

The finer points, the game’s expression and core, which are seen by the player through object transformation and metacommunication, are probably the only factor which can be classified with any certainty but their importance can vary significantly within the same game, depending on the relative combinations and relations between:

It is up to the game’s manager, referee or judge to ensure that the rules and the correct attitude and behaviour are maintained within the permitted ideological limits and rules of the game.

It should be noted (cf. Caillois (1958:65) and chapter 14) that each individual game also outlines what constitutes morally correct, “good behaviour” relative to the rules of the game. Caillois classifies and arranges play and games according to quality - dependent on the cultural and social frameworks in which they are played and based on three quality norms:

There are several ideological dimensions, in the form of pairs of opposites which are always prerequisites for a game. Further, there are cultural limitations between one pair of variables which are opposites i.e.: