The concrete, the diffuse and the abstract - as a paradox

Toys as signs and as index, icon and symbol, and the space for interpretation between these states, are paradoxical.

We cannot be sure that small children see toys first and foremost as toys and not as e.g. tools or something completely different, except if the parents at the same time show positive attitudes in the form of smiles and laughter.

According to Beckwith (1985), this means that the child is assisted both by the toys “meaning” from everyday “reality” and by his “parents’ conditioned expression”. Toys and parents together try to provoke a lighter, happier disposition.

However, if early childhood is filled with “synthetic sights and sounds” from such distorted toy influences (supplemented by fictitious and diffuse TV-programmes, later further supplemented with “false realities”, e.g. diffuse computer games), the child’s life will be “cocooned” in numerous synthetic messages which have absolutely nothing at all to do with reality.

The opportunity to connect the concepts’ influence and reality in what Derrida calls space for interpretation is suspended completely. And especially so for children under three years.

The dilemma with the “concrete” and the “diffuse” toys has also been expressed in another way. Steenhold (1989):

“A concrete toy is a toy which from its original form has maintained its value in play and as a plaything over time without having changed significantly. It is only rudimentarily adapted to circumstances.

The form toys have will never change or disappear from human consciousness. They are unique in their everlasting basic form.

Concrete toys are therefore determined for Mankind’s own development, in fact they are a necessary principal element in it - and create the connection between a toy’s meaning and its reality.

In contrast to concrete toys, diffuse toys are not easily definable. They are not comparable with the concrete toy tradition. They are not realistic. They suspend the connection between meaning and reality - the concrete framework, logic, the familiar strategy of play, creative imaginary pictures, experimentation, intensive play and tenacity. They are usually manufactured in very poor materials, often synthetics. 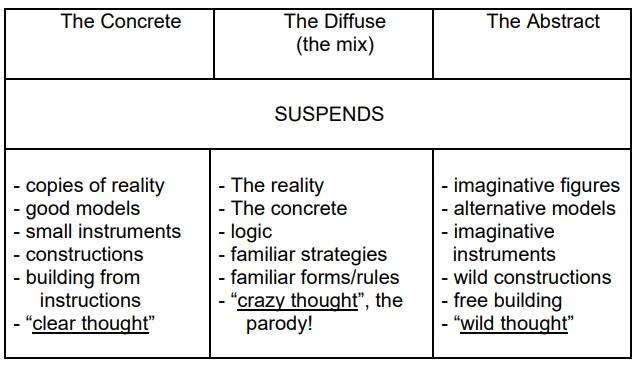 Briefly, the paradox in this matter is that if we ignore ”the diffuse and the abstract”, we limit toy analyses to realistic comparisons (that the doll is a baby, etc.).