A child’s picture of the world generally falls into two elementary categories:

and their play with objects can be texted as

There are two strong traditions of play in modern technological society of the 1990s. They are based on almost identical attitudes to play and toys and supported by the functionalist belief that toys are important for child development.

In modern society the child has two positions - which we can call two pictures of the world - which are most often fragmented and different, i.e.:

Free time which is either a) complete freedom to do/play with anything he chooses or b) a child care facility outside the home where all too often far too many things are organised for the child.

School life  which for many children holds the prospect of further education and which is organised most frequently in fixed and inflexible timetables with very structured content.

We see pastimes/hobbies, play and free fantasy on the one side and, on the other, demands, duties, schematic learning in an organised form (where even free time is organised for many children).

The one requires freedom

Fantasy, reproduction, unlimited possibilities and manipulation with bought or self-invented toys, things and worthless objects, props and instruments. They require creativity, good playmates, sufficient space and time, impulses from the immediate surroundings and from everyday life and the opportunity to experiment and explore.

The other dictates requirements

for learning and discipline administered to the children by means of important and prestigious dictates. These dictates enjoy society’s attention and admiration.

It also includes the entire toy market’s traditional discount supply which always includes the most stereotyped selection of the kind of toy whose effects are “canned entertainment” and simplification of activities. These fit in well with the pattern of modern society’s dominant cultural categories and the toy companies’ promoting supply and selection of several different products.

Both traditions are based on ordinary functionalist attitude to play but also on a critical opinion of it. As mentioned earlier, pedagogical and psychological toy research claims that the human being has a “primary imitation instinct” which is expressed through creative and inventive reproduction and by imitating and even parodying the immediate surroundings.

Apart from being instrumental, a toy as an object, a message containing “a case or something meaningful” can also be symbolic:

We must consider which of the two play traditions and which of the two attitudes to the function of toys we ought to give most influence. Both are of fundamental importance to the child’s understanding of play and life, the development of his personality and the way he sees society.

Both have meaning for the child’s “world pictures” - but they will cease to do so of there is no time or space for creative play, fantasy and reproduction, experimentation, exploration and symbolic manipulation.

The following tables illustrate five “spheres” between free areas, freedom and school life and the symbolic functions and instruments connected with these. 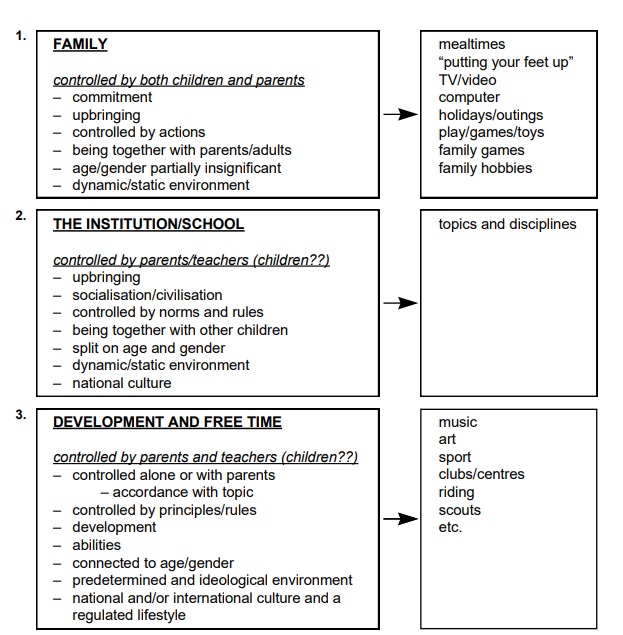 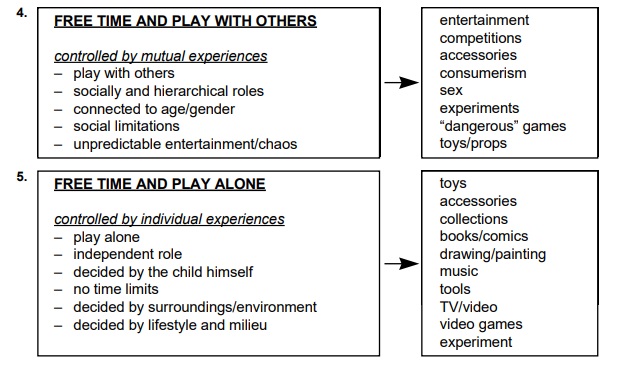