Each classification model/type is linked to a variety of systems of analysis which indicate, ascribe and emphasise the toys’ special attributes and significance. This is seen e.g. in the following examples of types of classifications which have all been contributory influences on the preparation of the model which will be used in this book.

The existing toy classifications will be split into three main groups: 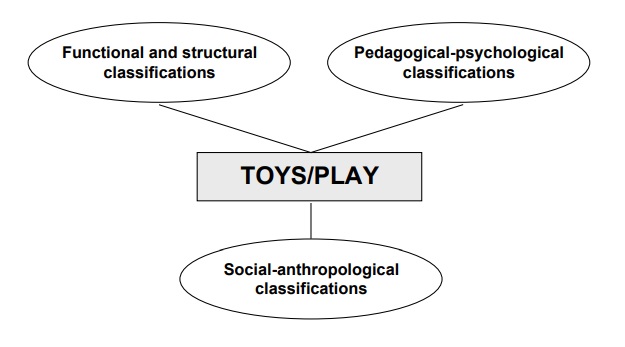 Functional and structural classifications illustrate the qualities of the toys’ functional and instrumental values, i.e. whether the toy is instructive, constructive, easy for children of a given age/level of development to manipulate, whether it is a concrete model or a copy of an original object, what material it is made of, its strength and appearance, methods used in producing it, price level, etc., which are all structural values which in some way indicate how the toy can supplement other toys.

Many toy constructions give a comprehensive insight into the nature of the relation between individual parts of a complex machine. The term “structural system toys” (the LEGO System, Playmobil system, teaching materials and demonstration models, etc.) describes how toy models can express unity and simplicity.

Pedagogical-psychological classifications classify toys according to how they can stimulate a child’s development generally or specifically, depending on the child’s age, pre-dispositions, handicaps, etc. The following pair of examples were a source of inspiration for the classification model chosen for this book because they are able to make classification simple and easy to understand.

The first example of toy classification - both functional/structural and pedagogical-psychological - according to children’s general age and stage of development and toy function, is the NAEYC list (National Association for the Education of Young Children, USA 1982). Toys are divided into groups including examples which give potential training areas and targets which the child can achieve through play with the toy.

There are seven groups of toys:

Examples of the motor type of materials are e.g. climbing frames, balls, bicycles, etc. whose aim is to train basic motor skills. Examples of the physical games are jumping, climbing, balancing, etc.

The NAEYC list toys regards toys as instruments to be used for a specific purpose. The classification isn’t built up on any specific general theory or set of rules but is logical and sensible in the way it gives a good general overview of the useful things we can find on the toy market.

Toys which have several different functional and structural aspects feature several places on the list.

The second example shows how toy and material categories are classified in accordance with one of the theories of developmental psychology (Piaget’s play theory). (Garon 1985). The various games are classified thus:

Toy and materials are categorised in long lists which are further divided into sub-categories according to age and developmental level of the child - as Piaget’s theory suggests.