Dangerous fantasy and the urgency of reality

It is true to say that the concepts “fantasy” and “play”/“toy” are closely linked. It is equally true to say that not all children have the same capacity for fantasy and that some children suffer a complete lack of it.

While there is no doubt that play is an expression of fantasy, one thing more is certain: some of the myriad of toys which are used in play are not especially imaginative.

Many toys express a catastrophic lack of imagination, even though many toy manufacturers would claim that their products “stimulate the child’s fantasy and encourage him to explore, experience and express his own world in a world without limitation.” (Quoted from the LEGO Group’s company concepts).

Other toy manufacturers do not claim any connection between fantasy and their particular toy products.

The concepts of fantasy and reality are in many ways opposite. Fantasy is e.g. fantasies, imaginary images, fiction, play, dreams, illusions, improvisation, etc.

Fantasy is expressed by making many and varied images of something new and alternative, things which do not (yet) exist, and things which are different than they are in reality.

Creativity is the ability to convert fantasy, thoughts and ideas into practise. This is why a person’s creativity can only be confirmed through something concrete in the form of a tangible result or a product which can be evaluated. 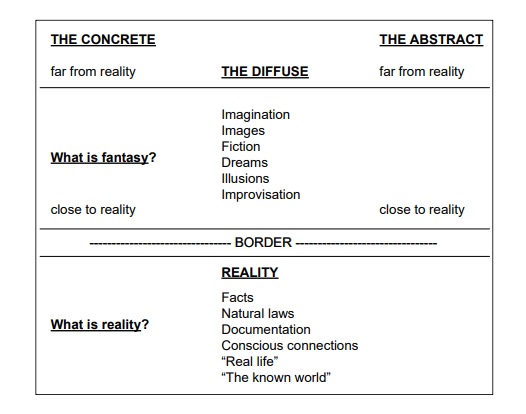 There are 2 basic forms of fantasy:

Between these poles lies the world of the diffuse.

Fantasy is, however, also real for the individual. In fact, it is a “conscious concept” because it exists in every person as a mental instrument for making images.

These images or imaginary pictures do not necessarily have much to do with reality - and most often don’t.

Fantasy collects its themes from everyday reality. These include primarily the elementary existential themes (which are also elementary for the most basic of human instincts (lust and drive) which - at different, imaginary levels - are part of all play and games.

The very visible and particularly urgent existential themes, both positive and negative, are:

Within play, these themes are constantly experimented with and imagined. These themes are also used a fictive concepts and themes in literature, films and on TV as narrative elements and formulas which text, “feed” and stimulate play.

The themes - in the form of toys and the children’s very obvious play with them - frighten and provoke a reaction from many parents.

Paradoxically, even though we try to minimise or remove “evil” and frightening things from reality, we introduce them in the form of fictive themes in the different media.

For example, aggressive play (not to be confused with “realistic aggression”) uses especially the negative themes. For anyone observing the game, these often turn the action of play towards “evil”, violence and anti-social behaviour.

Fantasy and play are therefore what we seek whenever we are afraid of reality or need to try out the exciting, interesting, good and evil things in the world or when we want to learn new things, gain new experiences with the elements of reality.

Using semiotic phraseology, we can say that life and the world can both be recognised and learned but we familiarise ourselves with the world through the signs and fictions we interpret it in.

In the same way as they go through a cultural development (see the section on “Play and Childhood Cultures”), children also go through fantasy development.

From birth to about 24 months, the child is fascinated by touching, imitating, copying, repeating, getting to know, controlling and mastering the basic functions and natural laws. The child does not fantasise but seeks to gain knowledge and understanding of the world at hand.

Once this is achieved, the child begins to make images about things, situations and episodes.

It is open to question whether the unbelievable energy the small child invests in all these basic activities can be called play at all. It might be more accurate to describe it as “hard work”, according to Rijt & Plooij (1992).

Between the ages of two and three years, the child no longer tries to comprehend the timeless functions of body and objects but his experience and knowledge of these allow him - with his new-found autonomy - to make conscious choices, to evaluate the limits of the possible and the impossible, “the real” and “the unreal”,

The child seeks to understand events in reality and learns that they can be categorised according to functions in everyday life. This experience forms the basis for the next important phase in the child’s life: role play (from three or four years).

From 4-6 years, children play. All imaginable concrete functions of being are played via role or group play in which the social and fictive elements are central.

They act out episodes, visions and situations in order to confirm or refute possibility/impossibility. They experiment to find the limits between truth/untruth, real/unreal, fiction/realism, the motivation being everyday life, events and functions from the worlds of childhood, adulthood and the media. Anything can be converted to play, roles and functions.

The children’s fantasy is concrete, “everyday imagination” which is played - literally “enacted” - in a narrative form.

From 6-7 years the children’s recognition of the future forms and there are suddenly completely new imaginative perspectives and universes.

This recognition and these discoveries about life can be dreamed about and played with - and they can be dangerous because they contain strange and unfamiliar abstract perspectives and consequences. But they can also be a diffuse mix of all kinds of disparate things.

Until now, the child’s being and play have been connected to his surroundings. Now a new world is revealed simultaneously on many levels:

The historical and the cultural become relevant in the form of a vast mixture of perspectives looking both back and forwards in time.

Consistent existential themes (the strong, urgent ones mentioned above) are no longer just stories and play but are also real - and worse still: they are no longer simple but can be graded, given different meanings and values, abstract and very diffuse.

Functions of reality and fantasy as utterance and interpretation

The functions mentioned above give the child the first unconscious recognition that these different types of functions can be manipulated and juggled in time, advanced and delayed as a kind of imaginary tale, account, story or image. Children recognise the possibilities inherent in the narrative.

Categorised stringently, these three basic types of function can be called:

1. The chronicle functionsare related (from birth) to the everyday timedimension and contribute to the child’s updating the common events in everyday life, being fetched and carried, shopping, Mum and Dad’s functions at home, bedtime, mealtimes, time for play, etc., so that the child is constantly aware of what is happening around him.

Later “news presentation” (talk and relating events) is added which again gives the child a framework for typical events in his everyday life and teaches him that understanding and interpretation of everyday events can be adjusted.

The child’s conception of time can be described as “everyday time and everyday life”.

2. The narrativefunctions- (from 2-3 years) involve a deeper collation of everyday events as they occur for the individual in comparison with others.

These are experiences, memories and encounters which are processed and related often in exciting and entertaining ways. They are longer stories, descriptions, ceremonies and ritual songs with which to a great extent the child is able to identify.

The child’s recognition of time is called “remembered time and individual life”.

3. In the mystical functions (from 5-6 years) the child attempts to create connections between everyday life situations and other events. These are partly eventswhich are remembered, events which others have experienced or events the child sees in the media. Connections are preferably logical and causal explanations or alternatively legitimate and specially interesting (exciting, dangerous!) courses of action. Many of these actions are beyond the child’s comprehension.

These functions include everything the child would like to but cannot understand. He seeks collectively acceptable interpretations, causal relations and explanations.

This type of recognition of time is called “story time and collective recognition and life”.

Fantasy is therefore not a simple phenomenon because its content is communicated in many different ways.

The narratives, pieces of information and stories produced by the fantasy are a means of understanding things. They are motivated by the individual’s basic instincts and his appetite for experiencing and recognising.

On the other hand, the many narratives about events and life functions are a way in which to find the shortcuts and imaginary journeys on which this appetite feeds in order to create meaning and interpretative patterns.

The many good stories in play and toys are just some of the ways in which we communicate, report and think.

Play and fantasy are the leitmotifs of life - two fantastically creative forces which reject the dark themes of death, meaninglessness, loneliness and constraint - and instead seek enlightenment, meaning and intention.