Chapter 10 The Relativity of Play

Is play some form of cultural and social anthropological phenomenon in human development, life and socialisation, developed under the right environmental conditions and with the prerequisite materials?

The following theories deal with this question and apportion the environment - including the nature of toys - great but varying significance. 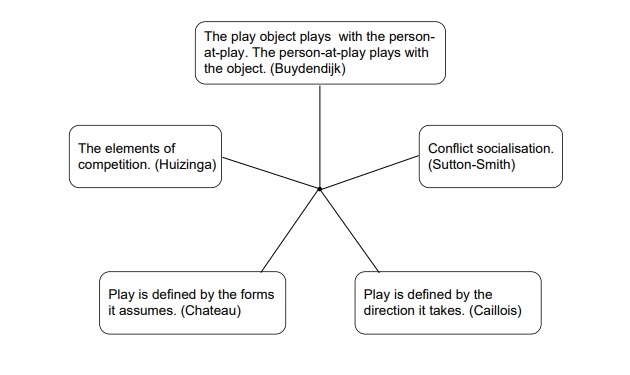 When adults observe children’s play and their incredible activity and vitality, they are often amazed by the children’s concentration, perseverance and tenacity.

An expression often used to describe (participants’) children’s concentration in play is that they are “in a world of their own” and that this explains their devotion to play.

Play itself (within its environment and context) has been described as “an  enclosed space”, relative to the open space around it. It is quite obvious to the observer that the person-at-play experiences something during play which he doesn’t experience when he carries out or completes a targeted activity. A piece of work which is carried out consciously and with concentration is quite a different type of action than play.

Work is carried out by means of power and self-discipline and demonstrates mastery (hegemony) over the situation. If work is successful, its environment is put into order in a logical way exactly as the person intended his environment to be.

“What significance does this have for the content of play in relation to other activities?,” asks Buydendijk (1933:9). He also indicates that play involves a number of dimensions in terms of content and experience, indicated e.g, by the way in which spontaneous actions are carried out in play in contrast to  deliberate actions carried out in other contexts.

The opposite would be to relate:

The relationship between the two terms alters and develops as feelings, passions and fascination express the child’s being in actions and play while recognition and experiences, knowledge and insight are more characteristic of the adult. In Bujdendijk’s explanation, the contrast between gnosis and pathos, intention/spontaneity, self-consciousness/forgetting oneself, power/powerlessness, distancing oneself from/devoting oneself to is elementary to the very nature of play because it brings elements of tension and surprise, hurdles to be overcome. (See Huizinga’s explanation of Buydendijk’s theory.)

Huizinga (1963:51) mentions that Buydendijk uses a variety of expressions to describe the nature of play: sense, consciousness, mind, thoughts, opinion, understanding and spirit.

Åm (1984,1989) - inspired by the work of Buydendijk - indicates in her study of play in kindergartens that children’s social fantasy play always contains this contrast because there is an area of tension between power and emotion. (She calls this “deep play”: it was Geertz (1972) who coined the phrase.)

This area of tension in children’s play expresses transactional aspects in the form of negotiations: who is allowed to participate in the game?, who will make decisions?, who gets to play the good roles?, who will have which toy?, etc. Play is a game full of contradictions concerned with status and resources because the participants seek to maximise certain values and one of the most important of these values is hegemony, power.

Schwartzman (1978:237) studied children’s conversation in order to find the power structures in play and social groups. She uses the terms text/context (play content/play framework) to explain that some children are by nature more powerful than others, more prone to use commanding body language and special expressions by means of which they either enclose other children within or exclude them from the play group. Schwartzman was inspired in particular by Bateson’s metacommunication theory (1972, 1978) where metacommunication in play is used on two levels:

However, metacommunication is not play but rather an incredibly good way to explain the many facets and qualities inherent in play.

In play, as in all social relations, it is important that the child learns how to find his place in the hierarchy. The process also involves coping with relinquishing power, devoting oneself directly to others, being subject to the domination of  others and subjecting oneself to the influence of others simply because “power is legitimate force” (Dumont (1966:153)). According to Åm (1991), “power” is always present. I totally disagree.

To sum up, using Buydendijk’s basic attitude to play, the relationship can be expressed as follows:

When something plays with the person-at-play, that “something” can be other persons-at-play, toys and the environment. Play occurs between two poles:

When the person-at-person accepts that he must give up the transactional aspect  - negotiations (i.e. how far a playmate, the toys or the surroundings are to be allowed/not allowed to exert power and influence) and experiences and “forgetting himself”- we can say that this person-at-play becomes: