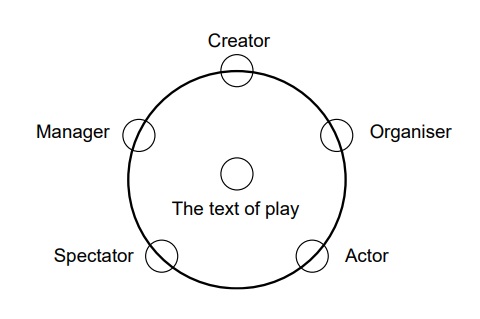 Sutton-Smith calls any game “unique” - because it occurs, progresses and dies out. When the game is played again, the new game is subject to a new time in a new place and with new persons-at-play in a new structure. The many variables make it wrong and indeed impossible to say much at all about the game in advance, for (to quote Caillois) play is defined by the forms it takes.

He lists four terms characterising the different positions of the persons-at-play within the game and describing the communication which occurs in relation to the distribution of roles.

Especially where controlled or organised play at school or in child care institutions orplay with adults as participans or observers is concerned, many people have told Sutton-Smith that he lacks the fifth “role term”, i.e.:

The manager decides, leads and distributes roles and functions within the game. This role is, of course, a general leadership role but - as with the other roles - the persons-at-play can take turns at playing the manager role.

Regardless of how many participants there are in a game (a game could be individual play where the person-at-play plays all the roles himself), the person(s)-at-play must retain perspective over all the roles and functions in addition to relating to the text and context of the game in their communication. During the play process the game will certainly be given a new text (re-texted) and may also be given a new context (recontexted).

The metacommunication, the unique aspect of the communication of play, contains the message about how the text is to be interpreted.