Play is defined by the forms it takes. Caillois (1958) returns to Huizinga’s description of the problems inherent in play, i.e. duplicity and contradiction.

Caillois stated that play can never be defined in advance, simply because it is defined by the forms it takes (Caillois, 1958:16).

There are therefore innumerable permutations because no-one can state precisely how a game will progress, develop or which forms it will take, depending on the various ages and stage of development of the persons-at-play and in relation to psychological norms, etc. etc.

The Form - play takes (Caillois names six forms) will, during

Production - occur in a certain atmosphere because any game has certain dynamic characteristics (Caillois names four types). These characteristics can then be accredited with

Quality - depending on the social and cultural environment in which the game occurs.

Defining what is good or poor quality takes place when the game is underway on the basis of the process, the persons-at-play, the observers or controllers. (Caillois names three frameworks within which quality evaluation takes place.)

In fact, there are only slight differences between Huizinga’s and Caillois’ theories about the different forms of play. The symbolic value and marginal utility of play is not discussed as both authors imply that this cannot be discussed because:

play is humanity - humanity is play.

The two authors also agree that play is a life function which cannot be completely defined - neither in logical nor in biological terms.

The concept of play hovers beyond thought, the sphere in which the human being usually expresses his spiritual and social life structures. Paradoxically, therefore, the fourth play form, the unproductive form, may appear to be the most useful and original form of action, activity or play (as long as it is part of a developmental and progressive philosophical evaluation which usually and necessarily ends up indicating “progress”) because it is cannot be evaluated on the basis of its marginal utility nor does it have any predetermined target and therefore releases incredible “energies” which can also be used in other spheres.

Any play or game can be “produced” or occurs somewhere between two conflicting poles which Caillois characterises using Greek terms: 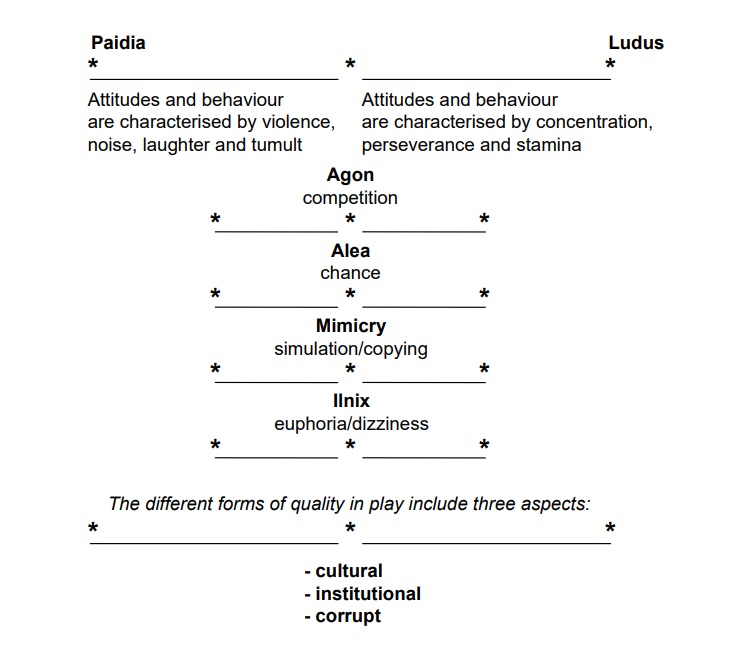 Any play/game occurs somewhere between the two poles and might move to one side or to the other during play. Certain games occur naturally in a certain atmosphere and have certain dynamic characteristics and it would be a breach of normal rules and even an expression of poor ethics to doubt the position of such a game.

Agon - competition, race - demonstrates who has mastery over whatever it is the competition or race is about. During or at the end of the process, there will be a winner and a loser.

Alea - chance - demonstrates/results in a practical decision which can change the end-result of a process where there is a conscious search for a settlement and where the result cannot be predicted.

Mimicry - simulation, copying - demonstrates/produces a copy of an original, compares something which is previously familiar or copies events, situations or people.

The four different dynamic characteristics overlap each other during play. How or where the games are played is significant. Differing circumstances may apply, ranging from time and space to the dispositions of the participants and preconditions for the situation or event.

Examples of the three forms of quality are listed below:

Cultural forms - on the borderline to social life:

Even though the examples are from the adult world of play/games, it is easy to relate these terms to play and games in the child’s world.

During play involving both adults and children, there is a certain amount of “rubbing off” from the adult to the child which the child later tries out in play/games with other children… and has to face the consequences. (Strange to note that, along with the four dynamic, i.e. active, qualities in play, Caillois also describes a fifth passive quality: observation. Observation is a natural occurrence within cultural, institutional and corrupt forms of play.)

The cultural and social forms of play are presented by Buydendijk, Huizinga and Chateau whilst corruption as a play form is presented for the first time in Chateau’s work.

People play only what they want to play and only for as long as they want - if not, then play is no longer play!

Caillois’ definition and categorisation of play also includes the many forms of corruption in which play becomes a vague entity, dependent upon the personality structure and personal “style of play and ethics of the person-at-play” (which a child gains in a variety of ways, i.e. from TV series, books and magazines, toys, etc.). The cultural and social environment in which the child is growing up forms the basis for his use of the different forms of play. Limitations, rules and barriers (often a product of the adult perspective) are tested and re-tested by the child through play. He doesn’t stop playing until he has discovered and experienced the entire content of the game, its qualities and opportunities.

In order to get as much as at all possible out of a game, the child can therefore resort to “corruption, magic and imaginary characteristics” - because it is only a game. Play consists of the person-at-play confirming and describing his own and others’ actions and imaginary pictures through dialogue and account. One consequence of placing the concept of corruption in play is that the concepts of morals and ethics follow in its wake.