Over many years, research into play, and in particular into children’s play, has been an accepted theme of humanist study. 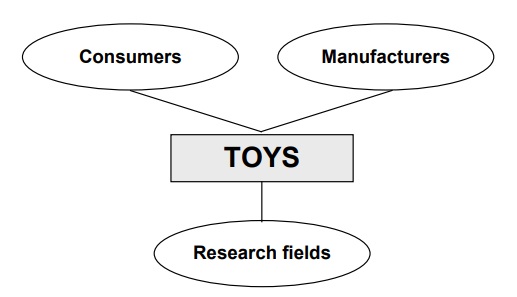 Within these fields, however, the following complex and negative tendencies are felt:

2. Some specific fields and professional areas of study refuse to accept toys as useful, utilitarian, significant and serious. This is expressed through their failure to address the subject and reluctance to see toys and play with toys in an interdisciplinary or scientific way.

3. The lack of practical and theoretical methods for gaining an overall perspective of the great multiplicity of toys in the form of classifications, analysis models or interdisciplinary ties. Many of these methods have yet to be developed.

However (despite being inanimate), toys - like so many of the things adults surround themselves with - do signify a promise of life and potential which partly qualifies the individual’s relationship to things via a dynamic or humanising process and appear to be indispensable attributes to the identity of the individual.

Toys promote interpersonal exchanges and work as a kind of social glue in modern sociality.

Things enable us to demonstrate a sense of belonging in many areas: financial, cultural, social, etc.

As Bourdieu (1979) expressed it: “The essence of the dominance of dominant groups lies in their ability to define what is distinct and special in society. This dominance is expressed and practised through socially visible tastes which are the degree of mastery of the expression of these distinctions.”

As for the toy market, it is important to note that over the past 25 years market research into toys and play has merely followed the principles of market research generally, i.e. to promote sales of the product - which in itself is not especially inspired or refreshing for a general understanding of the broad and general meaning of toys.

The way toys are marketed to children (and their parents), especially on TV, often seems intrusive, aggressive and destructive, especially to parents. This does nothing to encourage dialogue between manufacturers and consumers on the toy market.

Children concentrate a significant part of their childhood on play. Children’s playing lives and existence within and outside the family unit concentrate on play with toys with siblings, parents and playmates. What is more, toys play an important role in children’s and parents’ common activities and interests. Toys are, however, in no way the only significant factor in children’s lives, upbringing and development - and toys are in no way the only precondition for children’s being able to gain knowledge, abilities and attitudes.

Toys, and most often educational toys, are naturally represented in social institutions. In school, however, with the possible exception of the first years, toys on the whole have no part to play in education. Toys - both good ones and bad ones - can, however, be used to renew and inspire in teaching situations. If they are to be used here, then we need to have both quantitative and qualitative data and knowledge about the basic significance, symbolic value and utility value of toys.

The main difficulty associated with much of the basic literature and studies of toys, play and lifestyles lies in the status of (social) anthropology as a scientific discipline and in the value generally attributed to toys as contemporary ethnographic data.

How then has the current author as researcher selected and deselected and with what motivation?

Where anthropological fields are concerned, the following three perspectives were mentioned in Part 1:

There is, in addition, the continual process concerned with cultural transformation and transmission of the topic concerned. This is also problematic because the very act of incorporating an “unfamiliar” element with the aid of the familiar and “translating” (making the unfamiliar comprehensible (preferably also appealing) in its communicative form) is counterfeit.

In the first anthropological form toys are accredited significant value as objects in the dialogue between the participants.

Toys, which are themselves part of this dialogue, must not only be seen as implements for play but just as importantly also as things which play with the persons-at-play.

The toys are not only things or objects which are played with but objects which are also determining factors for the actions and choices which sustain the play process. Children and adults at play support and communicate culture through their games and the toys used in them. At the same time, the person-at-play is also a cultural developer because the nature of play is that it automatically gives life to new values which in turn create new symbols, thought processes and combinations of concepts.

Subjected as it is to a “cognitive” form of cultural perspective, the second anthropological form becomes relevant if both:

are classified and structured.

This is, in fact, a mental cultural theory which communicates the idea that it is possible to explain human thought systems, categorisations and classifications by means and with the help of regulations (a system of knowledge and cognition).

If we accept that:

then toys as a phenomenon (whether they either act as a representation or bear meaning in association with other things and objects or in actions in widely varying situations and events) will be accredited with meaning.

In the third anthropological form any given toy is included and regarded as a metaphor from which semantic categories can be devised.

Where cognitive and symbolic anthropology are concerned, culture is regarded as a framework (limited by time and space) within whose contours order, system and overview can be created, thus avoiding disorder and chaos.

Toys help to do this in the following ways:

In addition, there is cultural transmission and transformation on the basis of the some of the principles of social anthropology.

Transmission and transformation themselves occur within the limitations of time and space in the form of a sequence of actions - partly as play in an allotted form and partly as dialogue in a symbolic form.

The child’s creative, imaginative way of using toys and play, described in pedagogical (pedagogical-psychological) terms, together with social anthropology’s principles of transmission and transformation, indicates that toys have very great social and universal human significance.

But.. comprehension and mediation will always imply the presence of the dilemma that any level of comprehension and interpretation blocks the universal view! Even the most neutral description of toys, play and life patterns cannot avoid highlighting the split between the person who describes and all the others, even though he has the firmest of intentions of playing this split down and even though the intention is to describe the new elements in the character of the theme in question.

Where this dilemma is concerned, I lean on Wagner’s (1975) theory on how cultural translation and comprehension actually take place.

According to Wagner, the act of comprehending the unfamiliar by means of one’s own terminology and meanings implies something positive which makes communication possible and which encourages mediation and comprehension.

By tradition, the social and cultural anthropologist does not restrict his encounter with apparently inexplicable, unfamiliar or “foreign” phenomena to studies, fieldwork, interviews and data collection but is forced to stretch his own terminology and concepts to embrace the unfamiliar.

The researcher makes a cultural translation and “stretches concepts”, brings home the unfamiliar, the unknown and the obscure! Wagner gives no direct instructions as to how best to do this. He believes that the individual researcher must choose his own method and design.

Wagner (1975:14-16) uses the example of paintings by the Flemish painter, Brüeghel, depicting biblical stories in the everyday Flanders of the artist’s time. In these paintings Brüeghel used familiar and sympathetic images to illustrate the unfamiliar.

This and similar dilemmas of cultural translation lie in the fact that the terms used in any presentation tend to be interpreted on face value.

It is “as if” they are extant within the unfamiliar context and identical with the analogue. For this reason they either are or act as copies.

If this is the case, the translation has failed!

This distorted form of translation often occurs in connection with children’s play when play is interpreted “as if” the children are merely “copying” the realistic, real adult world - and this is far from the truth about what happens when children play.

Culture is, however, not something any one nation or group of people owns nor is it a suitable topic for study. Culture is sheer invention. An unfamiliar culture is invented in order to make the unfamiliar comprehensible.