Where the individual as consumer and user is concerned, it is, I suppose, relevant from an anthropological point of view to ask what distinguishes Man from other mammals. The obvious answer (see Relativity and logic in Part 1’s introduction) is:

In his book “The Flight from Freedom” (Flykten från Friheten (1945)), Erik Fromm accounts for the fact that modern Man does not in fact live the healthy, vegetative existence in ecological harmony which would give rise to these three factors.

On the contrary, these three factors are the root cause of Man’s extremely problematic attitude to life.

Characteristic for Fromm is that he presents “consumer Man” in his modern, industrialised society as alienated.

By this he means that Man is alienated from his day-to-day activities, his work, the “human” side of himself, the objects of his consumption. He is foreign to his fellow men, a stranger even to himself. In fact, alienation, in its extreme consequence, results from a situation where social and economic conditions impede satisfaction of fundamental biological needs. Alienation is a psychological condition which has developed within (modern) capitalist society. 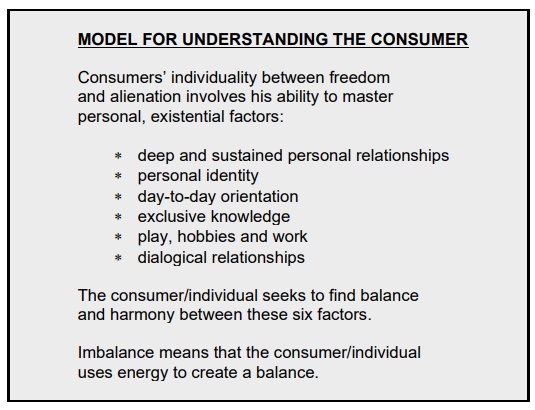 This description of modern Man’s existential problems must, of course, be seen as subjective. It is, however, also qualitative and, in any case, a long way short of a sociological analysis of modern Man’s complex situation.

A more precise method would be to view the concept of alienation (in Fromm’s sense of the word) as the outcome of certain factors in human existence and of specific social conditions.

Existential problems really only become significant once biological needs have been satisfied.

According to Fromm, apart from fundamental needs, Man has five other needs which he describes as existential needs and which occur because the human being is a unique, existential being.

I have taken the liberty of applying these five needs - which I have moderated and supplemented with a sixth - to the user in the role of consumer. It is the consumer’s/individual’s seeking to fulfil and to create a mutual balance and harmony between these concepts on the basis of individual eco-social circumstances which makes him a self-aware, reasoning and imaginative consumer.

Imbalance means that the consumer/individual expends energy in an attempt to create a balance - and is therefore exposed to becoming unselfconscious, unreasonable and stereotype as an individual, as a consumer and as a human being.

These six needs can briefly be described as:

To summarise, we can state that, as social changes and exchange of information now occur faster than ever before and as, at the same time, the struggle to ensure a protected and harmonious existence for oneself within safe margins is always one of the aims of human existence, the elimination of alienation must be the means by which we can achieve harmony - to the extent, that is, that this is possible.

But Life is just not that simple!

Being “alienated” can in itself be the driving force behind a conscious or unconscious positive change towards eliminating “alienation”.