A. Socio-psychological significance of the product 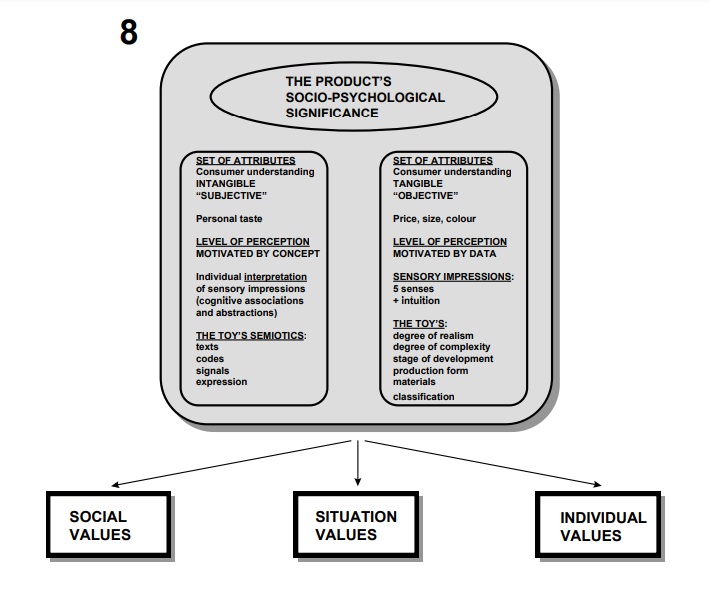 This overview illustrates the socio-psychological significance of toys and is motivated by the belief that certain attributes are associated with any toy (in fact any product) you care to mention. For examples, see the section on “girls’ and boys’ attributes”.

In general, attributes are the characteristics, qualities or properties which (according to Crawford (1985)) are used to describe, identify or characterise the product in question. Any toy can therefore be seen as the bearer of a small or indeed a large collection of particular attributes. Advertising alludes to these attributes when it emphasises the characteristics of the toy.

Toys gain social psychological significance on the strength of two types of sets of attributes:

1. Intangible and subjective sets of attributes

2. Tangible and objective sets of attributes

“The product (the toy) gains social psychological significance on the strength of consumer perception via both tangible and intangible sets of attributes.” Friedmann & Lessig (1987)

Where values are concerned, these sets of attributes are associated with certain social, situation and individual values which the individual consumer feels connected to and sees as useful.

Returning to the two types of sets of attributes:

1. The intangible and subjective sets of attributes

In the vast majority of cases these depend on individual, personal taste and attention paid to the toy. To a certain extent, however, they also depend on curiosity and the search for what a given product has to offer. Attention paid to the product can be described both as consumer perception of the product and also as cognitive association and abstraction relative to the attributes of the toy.

Cognitive psychology describes human behaviour as the processes by which human beings handle information, how the human being uses an accumulation of experience of environment a) to promote his understanding or interpretation of incoming information and b) to formulate questions about the environment in order to undertake specific actions.

These processes involve handling and assimilating information about the environment. This information is then used partly in understanding or interpreting new information and partly in questioning one’s immediate environment. Dialogues and questions pertaining to characteristics and knowledge in the interpretation mean, of course, that the individual makes active, subjective choices, takes action and engages in experiments. (This theme was introduced to the reader in Chapter 1: Dialogics and communication).

This cognitive approach to consumer behaviour describes buying behaviour as a process for dealing with information in which making a choice between a variety of different products presupposes that the consumer possesses information about these products.

Qualitative and cognitive selection of one toy concept in preference to another is therefore the result of knowledge and perception about the similarities and differences between the products and depends on the consumer’s being able to identify the attributes and utility value of individual toy products.

The scientific explanation for the individual consumer’s interpretation of the attributes of any given toy also includes the toy’s text, codes, signals and expression. Semiotics/suitable semiotic models are therefore the strongest - and in fact the only - means by which we can characterise the attribute set of the individual toy product.

When marketing toys (and many other types of products), the experts claim that it is possible - with the aid of multi-attribute models - to predict which consumer groups will prefer certain types of toys which have particular attributes, more than other groups.

Where the general theoretical background for the use of the so-called multi-attribute models for consumer behaviour are concerned, the models presuppose that information about toys (given by the advertising media) is accessible in the form of attributes. It is then possible to explain how, as part of consumer behaviour, consumers turn conclusions about the attributes of a certain toy into a general evaluation of the toy itself. This general evaluation of the toy forms the basis for the consumer’s ability to see the individual benefits of acquiring any given toy in preference to another.

However, the consumer group (most of them children) have widely varying individual, social and experience-based backgrounds (as described in the model for understanding the consumer). They only rarely interpret a product or toy on the basis of its individual attributes. There is good reason to believe that, regardless of his age and stage of development, the consumer

views the toy as a unit, remembers it in its entirety or perceives it as a structured entity compared to other toys. And this explains why children very often utilise a toy in a completely different way than its set of attributes suggest it should be used.

2. The tangible and objective sets of attributes

The objective sets of attributes are more tangible in the literal sense of the word. They are concerned with such specific aspects as price, size and colour. These aspects represent concrete treatment of data and information concerning the toy which human beings endowed with normal senses can register and perceive.

A toy gains social psychological significance for the consumers on the strength of the values associated with its set of attributes which the individual consumer can “bend” to suit his purpose.

As mentioned earlier, my argument is that the youngest consumers in particular see a toy as an entirety. This does not, however, mean that they see the complex of values - which can be listed for any toy product - as an entirety. The child “picks out” strong values which are suitable and useful to his purpose - and pieces them together to form a whole.

Three strong sets of values are particularly significant - the social, the situation-based and the individual value sets and these more or less coincide.

The social values of a toy are the positive benefits and experiences the consumer can get out of a toy when he/she plays with others. 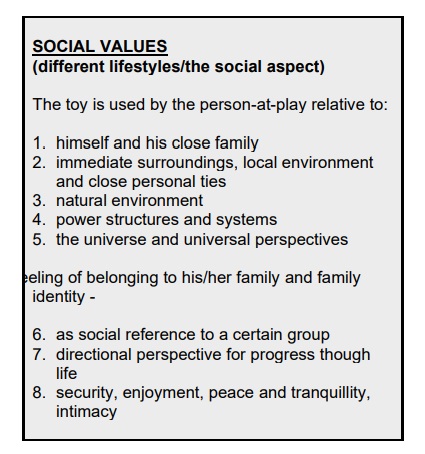 Toys create value for the person-at-play:

In addition, there are the values which can communicate family intimacy and identity via reference to certain, selected groups, particular desires for the children’s futures and education - and, of course, restorative values like security and enjoyment.

Secondly, the situation-based values are associated with the differences in experiences connected with daily routines, parties, relationships, encounters and establishing valuable new relationships. 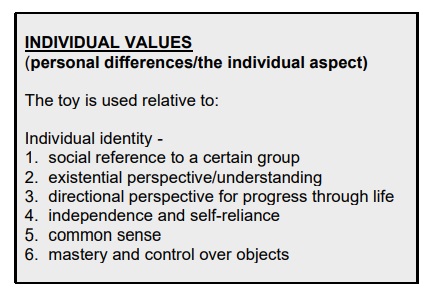 Finally, there are the individual values associated with the toy’s sets of attributes. There are six characteristics which appeal to and stimulate the needs and identity of the individual.

1. The toy can create a social reference to a certain group by indicating valueswhich the group identifies as their own.

2. Through its valuesa toy can be synonymous with the consumer or be seen as part of the consumer’s identity.

3. The toy can be influential or stimulate the directional perspective of a child’s progress through life, relative to his education and life cycle.

4. A toy can support development of the consumer’s independence and self-reliance.

5. A toy can stimulate the consumer’s common sense.

6. Lastly, a toy can contribute to the user’s learninghow to master and gain control over the toy as an object.