A. The ideological benefits (of purchase)

Not surprisingly, Sutton-Smith (1986:217-240) was the first to describe this phenomenon in relation to toys (in his book “Toys as Culture”).

He believes that social revolutions from the Renaissance through the French, American and Industrial Revolutions all used ideological and idealistic phrases which were intended to reach a higher aim.

The principal aim was intellectual and ideological freedom and individual freedom of expression. This naturally included the opportunity to satisfy social and individual needs connected to acquiring consumer goods.

Sutton-Smith says that, where toys were concerned, by the end of the 18th Century society had discovered that these small copies of real objects were an eminently suitable means by which - through play and a variety of games with them - to manifest and make reference to the advantages and disadvantages of everyday life and the grimness of reality and to illustrate and demystify society’s complexities.

Toys, small copies of the implements of the “real world”, were brought in to serve the pedagogical purposes of the people!

Toys, play and games thus became objects with an inherent ideological purpose which was to confirm or refute the consumers’, person-at-play’s or players’ desires, needs and aims. The consumer acquired visible, desired benefits when he allowed his children to practise for the future with the help of toys. Toys continue to play this same role today.

The significance of toys was brought to the attention of adult consumers in particular and was brought in to serve the purposes of work and fairy tales/play.

If we bring this up to date, this doesn’t actually mean that all consumer groups focus on the same benefits when they use the same types of toys. On the contrary, the same toys can be utilised in order to provide a benefit from several extremely different ideological motivations - which means, according to Sutton-Smith, that the significance and value of toys are relative! 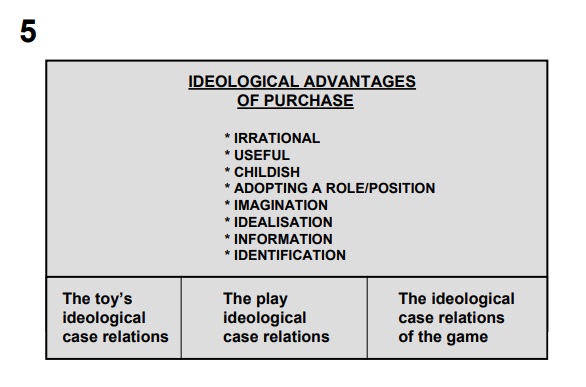 Sutton-Smith names eight instances which are general, primary characteristics of:

the ideological benefits gained by the consumer when he either acquires or purchases toys. With his purchase, the benefits may be connected to concepts such as irrationality, utility, childishness, adoption of a role or position, imagination, idealisation, information and identification.

These eight benefits will be described in further detail. I wish to emphasise that the description will not be of Sutton-Smith’s (1986:217-240) serious literary work on the eight benefits but rather my own brief summary and interpretation of them.

In addition, toys, play and games each have their own inherent benefits on the basis of general purposes connected to them. Only brief reference to these will be given here as they are described in chapters 2, 3 and 4 and elucidated further in Part II - Toys and Part III - Play.