B. The individual appeal of the product 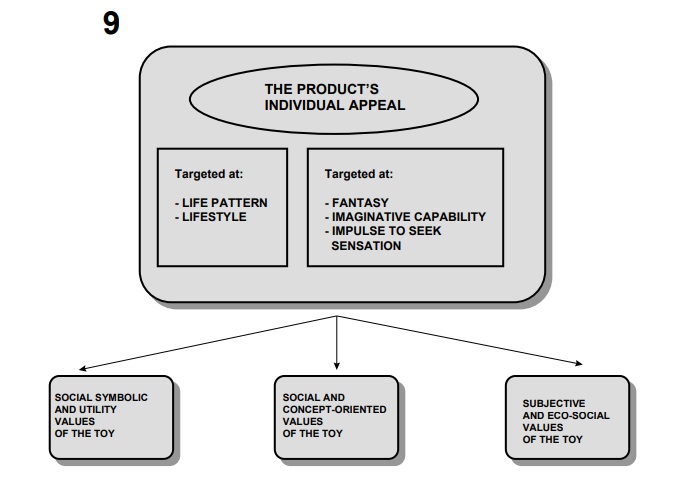 The individual appeal of a toy is directed towards two spheres which, in a way, have already been described in various connections in this book. We are concerned here with the way a toy appeals to the consumer’s:

2. His fantasy, imaginative powers, his urge to seek individual sensation and experiences and the valuesassociated with these.

Where life pattern and lifestyle are concerned, the sphere has been covered in the description of the consumer representative in Part IV (Chapter 13).

The remaining spheres have also already been described - particularly in Part II.

We now turn our attention to values.

Social symbol and utility values of toys - with particular reference to communication.

The communicative role and position of any toy is an important part of its social symbolic and utility values. How far “the toy attracts the user and vice versa” is part of the dialogic constellation between toy and user. As earlier mentioned (Chapter 10), Buydendijk hypothesised that the user and the toy play reciprocally, i.e. with each other.

Is this just plain nonsense? Can inanimate objects play with living human beings? It has been established that “it” or a living being can play with inanimate and animate things. When a thing has communicative value, an inherent basis for interpretation exists. This is the reasoning behind utility maximisation.

Social and concept-oriented values of the toy

The position of toys within the home environment and the significance of toys (especially expensive or particularly attractive toys) for communication between the child and his parents (see also Chapter 15) is often valuable and significant as inventory.

By inventory we mean toys/products for “putting on display” and functional products, the use of which may or may not be subject to strict regulations. These are naturally prestigious toys - and prestige is a value. New toys which gain utility value as “cool” (fashionable) perform the same function as expensive toys. The purchase of such toys is not only motivated by a desire to play with them. They are also purchased with the intention of being displayed as objects for the admiration of visitors to the home.

Very expensive toys also often have utility value as objects from which children can experience something. They contribute to the learning process - learning through play.

Subjective and eco-social values of the toy

The eco-social values are discussed elsewhere in this book (see Chapter 14).

On the basis of Sutton Smith’s hypothesis about the relativist significance of the toy to the consumer (Chapter 11), the role and position of the toy in relation to the subject’s own personal universe, whether open or private, is determined by relative factors.