The loyal and the disloyal (casual) consumer

A loyal or a disloyal consumer can be either a child or an adult.

The loyal consumer selects and is interested in certain types of toys and can in fact be described as disloyal in his rejection of other types of toys.

The toys are given a specific value and significance which can either be positive or negative, depending on whether the consumer can see advantages or disadvantages in owning them. 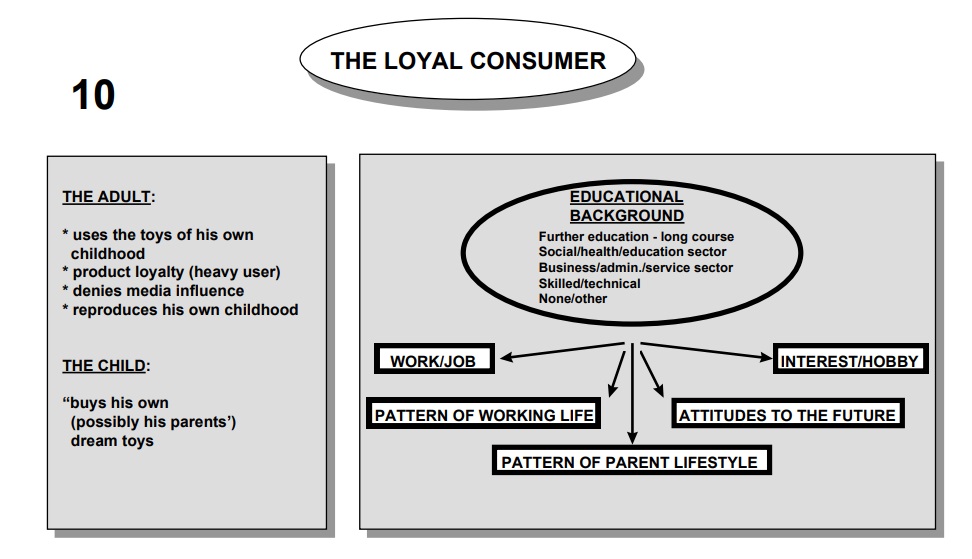 The loyal adult consumer who is also a parent naturally looks back to the toys he was interested in and fascinated by as a child. All adults are loyal to toy products which they enjoyed playing with in childhood. They want to pass on positive experiences to their children, thus recreating their own childhood experiences.

This would seem to indicate that parents’ attitudes, interests and understanding in connection with toys rub off on their children as a form of tradition passing from father to son or from mother to daughter. This is, however, not necessarily the case! Modern fathers and mothers do in fact inspire their sons and daughters - with no thought for gender and across the boundaries of the traditional roles.

The reason for this is that the toys the parents played with were generally far less sophisticated than the toys children play with today - and that parents fortunately also allow themselves to be inspired by modern toys.

If, however, there is any “rubbing off” between parents’ and children’s toys, it only applies to toys which are traditional or fundamental toys which all children play with.

As mentioned, parents’ education can be the reason why children are stimulated to buy their parents’ dream toys - and this being so, it is possible to find a causal connection between children’s and their parents’ interest in a specific toy.

However, the customer is indeed King!

Toy production (and demand for the production factor) are determined by the consumers’ needs and the demand for certain products. This means that users as consumers are a force to be reckoned with when manufacturers have to decide which toy products to produce (and indirectly for which production factors there is a demand).

But how much clout does the user really have? Is it not more likely that clever manufacturers contribute to developing a need for certain types of toys which they later produce in order to satisfy the user?

As we concluded earlier, as a result of undergoing the socialisation process, all children need to play with certain basic and fundamental forms of toys. This is in fact seen as a sine qua non for the child’s development into a complete, social and sovereign person in modern society. 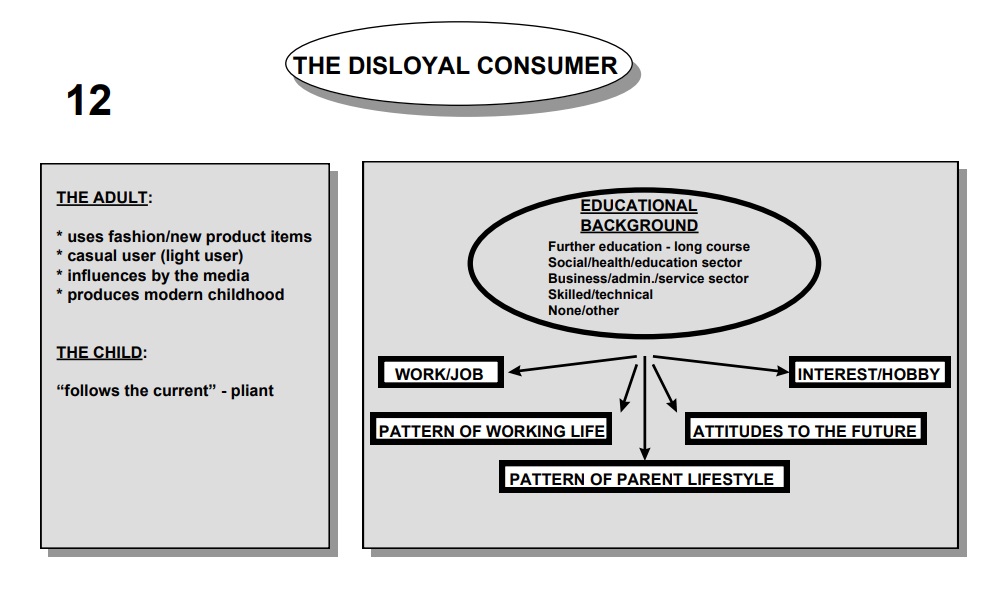 If children cannot get hold of proper toys or good copies of real objects, they use symbolic objects (stones, throw-away packaging) instead.

This means that it makes good sense to distinguish between “real” and “artificial” needs for toys where real needs apply to indispensable and basic forms of toys while artificial needs apply to “five minute wonder toys” in any shape or form.

“Five minute wonder” toys are specially targeted at the casual user. They are marketed most often on TV and children are persuaded to buy. The casual user/consumer is unreliable, “flows with the current” and is easily won over.