Chapter 21 The Doll and the Human Being 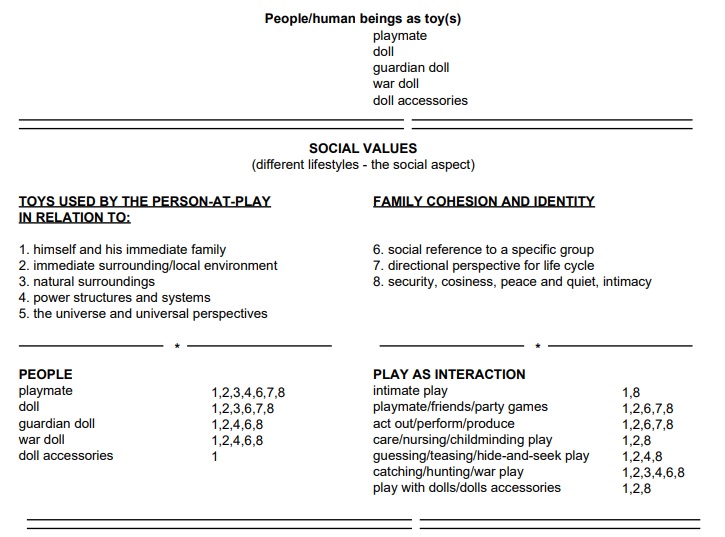 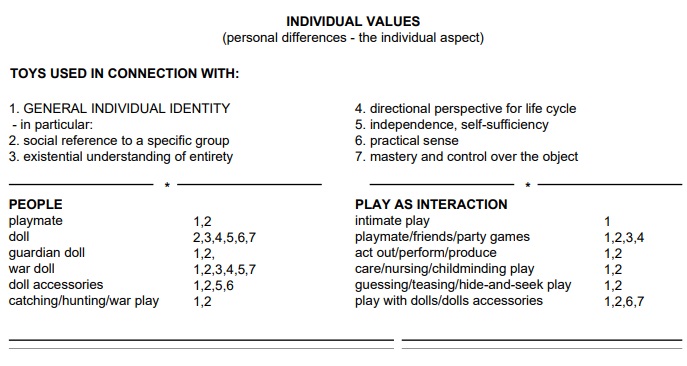 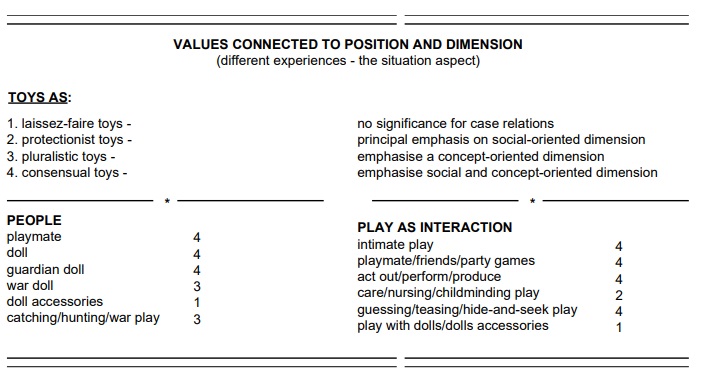 Briefly, a doll is a toy which represents a person. A human figure is not always a doll but can be a toy. Some types of dolls are not toys.

The word “doll” used to be a very broad term which also included “figures which look like people” but we now have to differentiate between figures and dolls. The word and term “doll” is now often connected with “a decorative human object”, most often female. However, it is not much of a commendation for a girl or woman to be called “a doll” or “a Barbie doll”.

The oldest known dolls or human figures are approximately 10,000 years old. They are typically obviously female and were probably cult “goddess figures”. Some of today’s dolls are also cult goddesses of a kind.

Europe’s oldest toy doll was found in a child’s grave dating from the time of Ancient Greece and Rome.

The doll and the figure are the motivation for all play because the person-at-play uses the doll as the starting point, an entry into the fictive world and the events within play.

Around the doll, there are the doll’s or the person’s animals, implements, systems and constructions, natural surroundings - i.e. for the sake of clarity,  as in the toy classification.

This chapter refers first and foremost to the dolls’ and the figures’ texts whereas animals, implements, systems, constructions and Nature take a secondary role to the doll.

The Night The Toys Came To Life

As it so happened, the magic moonbeam slipped through the open window of a little boy’s bedroom. That is how, at the stroke of midnight, the stuffed animals in the room suddenly came to life with a great yawn. Teddy, the oldest toy and the biggest of all, read aloud from a book he had found.

“…and the balloon soared high into the sky”, he read. “below them lay field and woodlands, mountains and plains. How splendid the world seemed from such a height!” However not everyone was paying attention…

“Be quiet!” shouted the elephant angrily, over the noise.

“Grr!” growled a large dog behind him. “I can’t hear the story!” But how could anyone stop such confusion: kittens, bears, rabbits, tigers, mice, everybody wanted to be part of the miracle. Wasn’t it fun being able to move! They chattered and sang, but most of all they played games…

The tiny rabbit, who was the smallest of them all, said, “Let’s go to the amusement park.” They rushed to the door and set out on a wonderful adventure in magical Toyland, where time passes differently than in our world. One short, adventurous night was to seem like many days of fun to the lucky stuffed animals.

Only big Teddy, still buried in his book, stayed sitting at the foot of the bed. “I’ll wait here,” he said.