The classic boys’ doll universe will be subdivided into four spheres which are determined by the boys’ age and degree of development. Through play with these universes, the boys gain experience with roles and with the social life they observe in their surroundings.

1. 0-2 years: As in the case of the small girls, baby boys play with their mother’s body and with their own body. This play gives the boy a fundamental understandingof the simple, primitive forms of play with dolls and an understanding of play/interaction with another person. His first dolls and soft toys have to do exactly the same as the little boy himself: sleep, eat, take a bath, etc.

2. 2-3 years: In contrast to little girls’ playwith baby dolls, little boys are interested in a wide variety of different animals and animal figure Only a minority of little boys own a baby doll but most of them have a teddy bear which follows them around everywhere they go. At a very early age, boys gain an interest in things, specially interesting objects and toys which are copies of small implements. The significance of these objects is the same as that of the rag doll or teddy bear. This means that small boys are oriented more towards objects and implements/tools than small girls. They are very attentive to how the objects or tools are used. Many small boys take their toys to bed with them and even sleep with them. Boys will often test the strength of the toys relative to their own physical strength. Toys are often treated roughly in play because boys’ consciously expose them to very violent handling in order to test their durability, function and control. In boys’ play, toys explode, are crashed into by cars and there is a constant stream of accidents and catastrophes, etc.

3. 2-4 years: While girls of this age play simple dolls’ house gamesand with “family values” between Father, Mother and children, boys play realistic role play with rules and values associated with the car mechanic’s workshop - mechanics, props, cars and equipment and with the farm - farm animals and many different kinds of tools and implements. Small figures like drivers, tractor drivers are named after their functions and are seldom given a real name.

4. 4-8 years: Apart from play with the car mechanics’ workshop and the farm, by the age of four years, boys’ extend their play to include airports, sea ports, railway stations and forts. In time, this kind of play with a “base” will include spacestations and underwater cities too. The themes of play become systematised  and the boys dream and narrate stories about many episodes and situations within these themes. TV series in particular are sources of inspiration. The heroes of these series gain special significance as they are often found as function figures/dolls on the toy market. They also become part of the boys’ collections of dolls and figures. 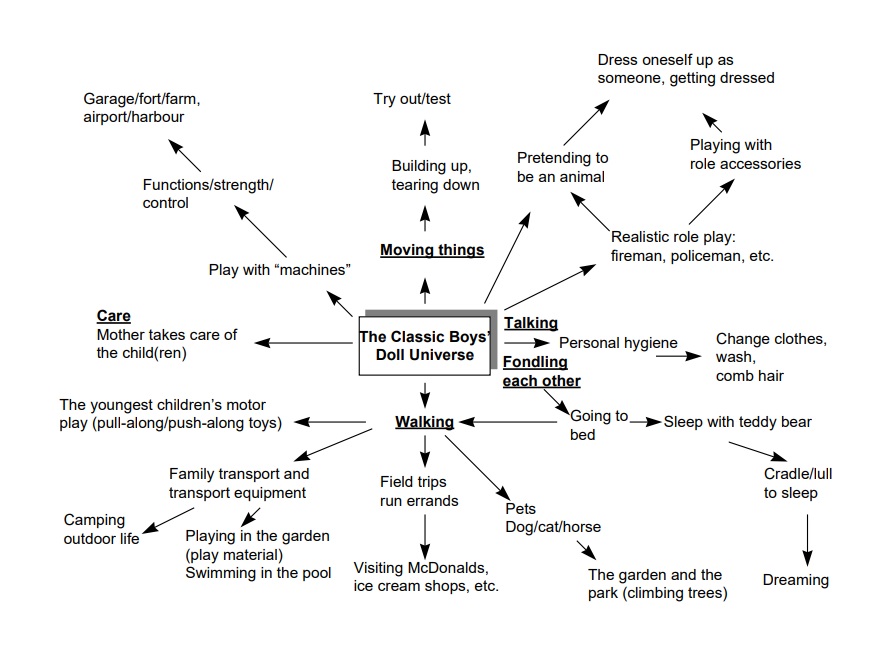