This universe is vital for development of the boy’s personality from the ages of 6-7 years. At this age, the boy understands the concepts of past and future and now tries to achieve a perception of self by placing ebullient, potent and violent stories and accounts of human beings in time and space.

This dream and play universe is a fantasy universe in which boys’ play is  NOT directly texted or stimulated by their own experiences and observations of everyday life. Fantasy controls play. Dreams and imaginary pictures flow incessantly. But the dreams represent something violent and fantastic both emotionally and physically. If they were real for the boy himself, the consequences of the episodes would be fatal and confusing.

Stimulation for this kind of play comes from classic stories of heroes in books, comic strips and TV series, including grand, timeless tales of heroes and warriors and their bravery in the face of adversity. The boys’ universes are often built both on cultural myths and the gallery of persons in these myths and on the boys’ own creative dreams about being permitted to be “in on the action”.

Major moral and ethical themes are included in the stories and in play which take place either in the past (as historical time) or in the future.

Ethical dramatic themes in the stories include:

Moral themes tackled in the dreams and games include:

1. From 5-6 years: the boys show interest in the classical fairy tales and folk tales with their role list of kings, queens, princes and princesses, wicked witches, good fairies and wizards. As described in Chapter 5, Boy’s attributes: Boys’ romanticism, The classic narrative, boys’ dreamsand play focus on the hero’s (the boy’s) personal development through tests and battles which he is expected to win if he is to win the hand of the princess (his prize) and become king (employment). Folk tales with their many mystical, “underground” beings are about coping, surviving and returning home from a journey richer and wiser than at the outset. Cunning, personal courage and ingenuity are top priority characteristics. The role list is filled with classical figures which are archetypal and almost stereotype, roles which are easy to recognise and act out. Dolls and other figures used by boys in play with these themes are classical dolls whose appearance is easily comprehended so that play can quickly get off the ground. 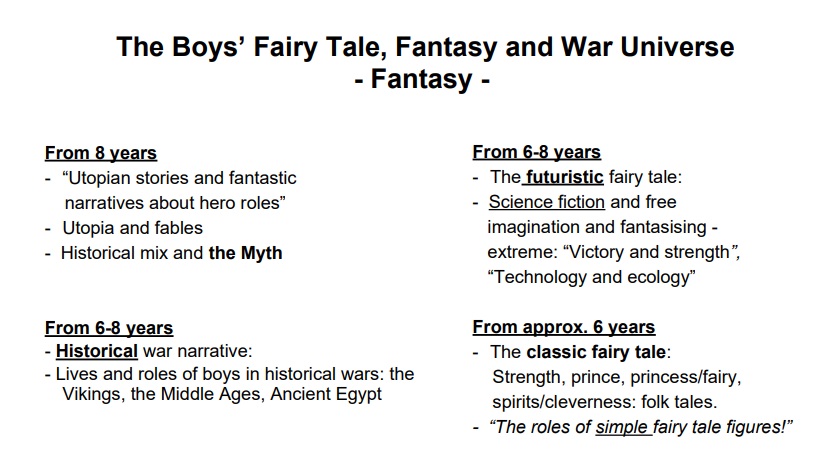 2. From 6-8 years: At this age the boys begin to appreciate cultural differences and that culture is associated with and dependent upon geography. The boys’ playwith their toys deals with wars and war themes under a variety of different circumstances. The preconditions for war and its arsenal of implements differ and depend on the era and available resources, which in turn influence the way a war is fought. However, the concept of war is abstract for children of this age because, despite the fact that it is a realistic theme, it is distant from the children’s everyday lives (unless of course they are living in a war zone). The war dolls found on the toy market are either copies of classical heroes or copies of recent, “invented” warriors in TV series or in books. Each warrior has a personality and charisma. The war figures are modelled on classic soldiers in different countries’ army uniforms and are as much a collectors’ item for children as they are for adults.

3. From 6-8 years: The futuristic tale is exclusively about the future, fearof the future, victories and defeats and fear of the unknown. It is, however, also a dream about fantastic things which could happen and which would bring beauty and peace with them. Technology has a major role to play in the futuristic universe simply because it is prerequisite for the future. The boys sense and understand the future and science fiction as challenges which they must meet and make the best of. In their dreams they see themselves either as heroes or as technocrats or “techno-nerds” who are equipped to meet the challenges of the future. 6-8 year olds do not yet understand the abstract narrative process on which narratives of the future depend. At this age, the boys begin to understand the isolated dramatic episodes and events which make up the good story. Star Wars and Star Trek are typical examples of the type of story which children of this age can more or less follow and understand. The dolls these children play with are normally copies of the protagonists, with the weapons, props and equipment seen in the film/TV

4. From 9-10 years, boys strive to comprehend the utopian universe in play and dreams. Totally utopian stories/narratives which in many cases demand maturity and knowledgeof the child if he is to be able to understand them, are mixtures of myths, legends, fables and poetry. Furthermore, utopian stories always deal with serious philosophical and moral/ethical topics which form the backbone of the story. Strong, negative themes like death, war, violence, sabotage, attack and angst are confronted by positive themes like existence, peace, security, harmony, intimacy and yearning. The concepts of time and space often dissolve entirely so the person who watches or listens to the tale must have a sense of the concepts of Fate and belief if he is to be able to understand what is going on. The hero of these stories is most often an intelligent and active young man but can also be a woman or girl with whom the person-at-play who “dreams” the story is allied to and can identify with. On the toy market, dolls for this universe are few and far between. 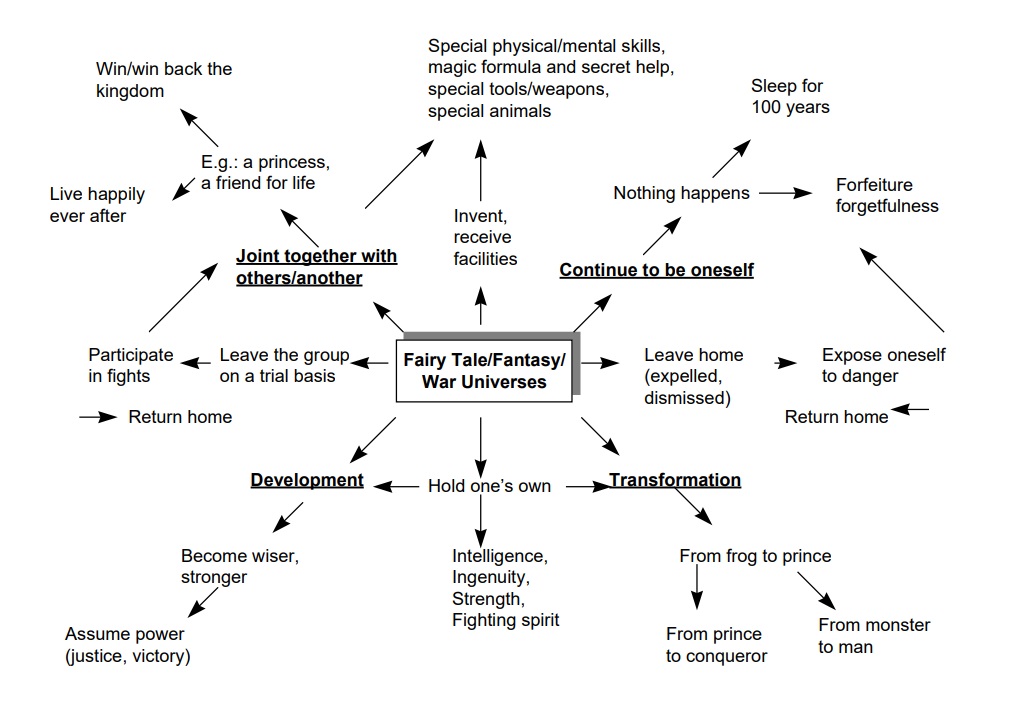