The older “little boy” has learned the ordinary rules for what is right and wrong, what is good and what is evil. However, boys experiment a great deal with these principles and test out rules, regulations and boundaries through their play with toys. They pay particular attention to the elementary functional processes which they observe in everyday life outside the home: a truck backing up or manoeuvring through a narrow passage, emergency service personnel or policemen who turn out to cope with a special situation of some kind, building work with cranes and diggers, skilled workers, traffic conditions, etc. 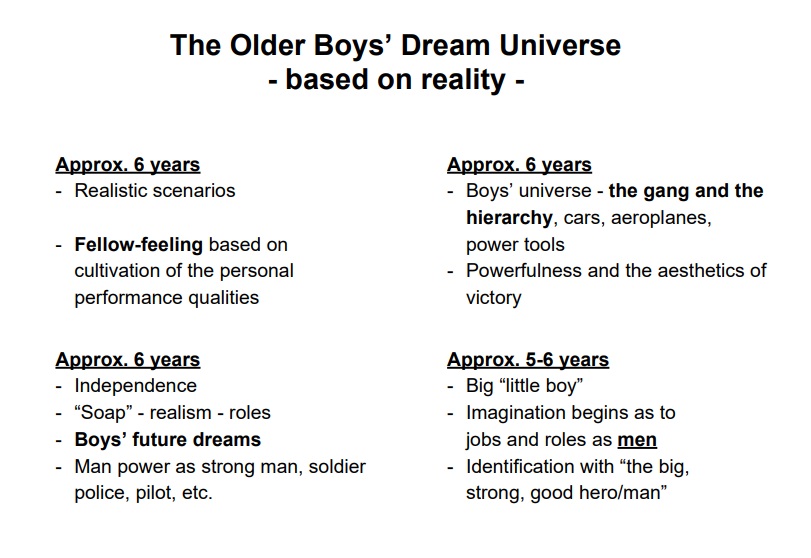 Difficult or complicated functions and processes interest the boys and they admire the men involved in them for their expertise, strength, skills and especially their jargon which is tested out and imitated in play. All the difficult situations in a working process are made even more complicated in play so that the skilled workers and drivers can act like the heroes of everyday life.

1. From 5-6 years: The boy imagines and dreamsthat he as an adult will have one (often several) of these jobs which will give him status and make him the object of admiration. Imitation of the everyday working processes carried out by “real men” is demonstrated in play on the floor with cars, machines and transport equipment to the extent that play approaches parody. But it is no parody. The boys identify with the “big, strong men” they meet when things happen in reality. Their play is profoundly serious and the processes in play require deep concentration. The boys discuss very difficult processes in detail and the jargon used is tested out and debated.

2. From six years boys begin to dream about the near future. The dreamsare motivated by things they are familiar with and have seen. A boy will dream about what he could (possibly) be when he grows up. Of course, he has to become someone others admire. The meaning of “masculinity” is investigated, reinforced and exaggerated to the extent that narratives and dreams become “soaps” with the boy himself in the leading role. He sees himself as strong, responsible and supportive and, naturally, also as someone who attracts attention. Six year old boys do not yet understand the significance of the three concepts in italics but they demonstrate them in play via a variety of behavioural patterns. Sources of inspiration for the boys’ play are realistic everyday life, accounts, stories and TV.

3. From about six years boys begin to organise themselves in interest groups or “hordes” where a shared interest in a particular game or hobbyis the motivating factor. Games and mutual interaction between the boys often become a special mission. They are fascinated by experimenting with and exchanging different kinds of power and knowledge/know-how. Boys assign and distribute roles in their self-constituted groups and they choose a leader. (Alternatively, a strong boy will elect himself leader or be voted leader by the other boys.) The organisational and leadership structure is hierarchic and this often brings about minor skirmishes when, from time to time, the leader’s authority is challenged by other boys. The boys find their  motive and inspiration for organising themselves in groups in literary stories and historical accounts about groups and bands, as well as on TV. Boys tend to discuss very often how far the leader - or the boy who makes the decisions - is doing the wrong or right thing, regardless of whether the boy concerned is a good boy or a bad boy. Having and exerting power per se are sufficient cause for admiration. Power and victory are synonymous.

4. Also from about six years, boys are able to date ordinary, simple situations and episodes so that they can play with timeas a concept. The boy is able to judge the past and the future on the basis of a realistic present. He is able to form an attitude to the roles and positions adopted by the identification figures, regardless of whether these belong in the past, the present or the future. The pursuit of the qualities of personal performance are now the focal point of boys’ play. When boys play in groups, they begin now to distribute and take it in turns to play the roles of hero and villain. The functional roles which were focal points in younger boys’ play are now replaced by character roles where each role and person has individual characteristics and an individual personality structure. At this juncture, the character doll with its accessory utility and service animals and its implements and weapons becomes the dominant theme in the boys’ play. 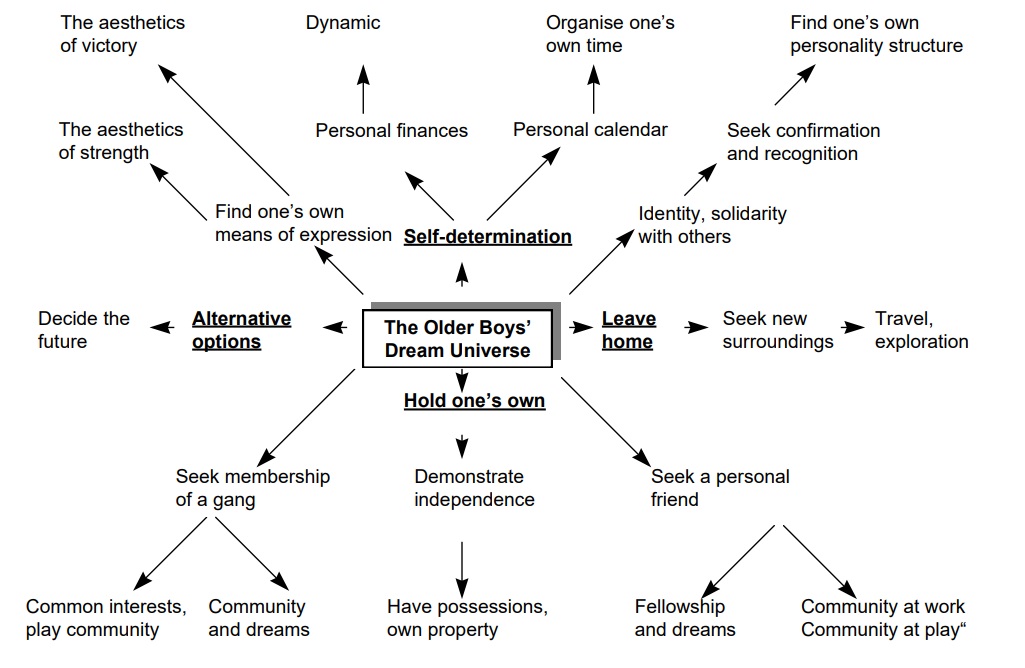