The parody and the synthetic pseudo-universe

Characteristic of this universe is that the stories/narratives in play are far removed from reality or exaggerated to such an extent that they verge on going “over the top” and thus becoming a lie or untruth. It is only in the most extreme case that one can imagine that these things could really happen.

In order to understand this universe, boys have to have experience of the events of everyday life and otherwise be at least 6-8 years old if they are to be able to convert the stories in this universe to play and dreams. But the further the events are removed from reality, the greater the opportunities for manipulating with time, space, situations and concepts and for using imagination in play.

Boys are fascinated by concepts such as:

The older boys know what parody is and they know that it is possible to poke fun at or parody serious events. The fact that the stories are so utopian or so far distanced from reality means that the boys can see that the non-existent tales are artificial - synthetic - and therefore they cannot be taken (completely) seriously, even though they are exciting. The boys, are however, naturally good at “playing as if” and dreaming.

There is a plethora of stories within this sphere and a plentiful supply of dolls which symbolise people in these exciting episodes and often completely utopian accounts. 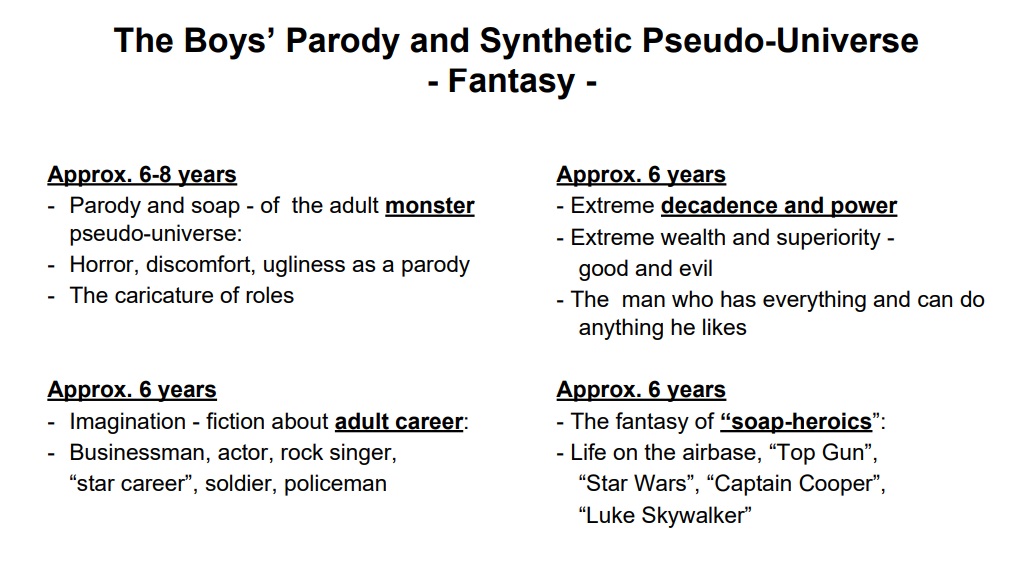 1. From six years: A dream or a game where the boy single-handedly - having faced many problems and fought with super-human strength against e.g. strange beings from outer space- discovers a new planet and gives it his own name, could be described as “soap heroics”. The stories, novels and films which deal with life on the air base or space station, being the star of “Top Gun”, being a “Star Wars” hero, Captain Cooper or Luke Skywalker. The stories deal with the experience of victory and happiness and being fortunate. The hero is loved and sometimes accompanied by a beautiful princess, brave and clever warriors or technical “nerds” - and possibly lives close to his mother and sisters. The hero dolls with their quite ordinary appearances, human face and vulnerable minds stimulate the dreams and the games.

2. From 8-10 years: Dreams and fictions concerned with an utopian, adult career in the public eye. The hero is extremely famous for the good he does and is rewarded with extremely great success. The boy in the dream is usually a rock musician in a cool band with an enthusiastic crowd of fans in his wake. A busy managermakes all the dates and takes care of business. Being an actor is an alternative and the actor has, of course, his admirers. Sometimes the dream hero is an intelligent, intellectual scientist or explorer who has a streak of genius or special talents, who has just returned from the centre of the earth or from outer space. The hero can also be a star warrior who has single-handedly fought to hold an outpost in a distant galaxy in a far-flung corner of the universe. However, in the dreams and games, the hero is seen in contact with other famous people, he gives interviews and is cheered, admired and awarded medals for his brilliant efforts and is therefore able to bathe in the glory of his victory while the whole world looks on. The hero is definitely not a policeman or a fireman because they are just “ordinary heroes”.

3. From 8-10 years old, the boys are familiar with the gameswhich go on in a group when they choose a leader. The boys’ group or “horde” culture is normally visibly organised and governed by rules and a hierarchical structure. Group membership is normally organised in such a way as to make space for open and changing relationships. The boys discuss leadership and power and poor leadership and the abuse of power. The concept of “leadership style” becomes a subject for debate and this means that the boys dream and play out the different permutations. Just as boys play aggression, they also play and experiment with the ugly side of life and the characteristics of the bad leader. He can be decadent, supercilious or dominating. He may abuse his power and requisition or steal things and people, including a sad princess who is also subjected to abuse. He can also be disdainful, indifferent or faithless to his loyal old retainers/friends and may deal unjustly with them. In the worst case, he is hated and his subjects seek to kill him or to bring about his fall. 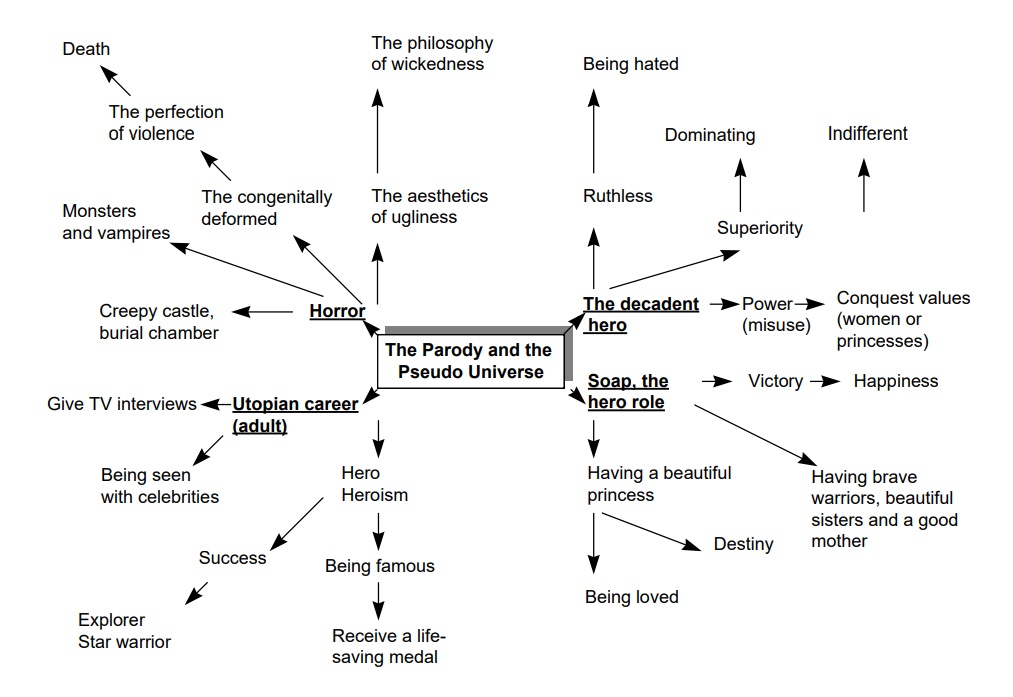 4. The final sphere must be called “the extreme of the extreme”: horror. The boys engage in systematic fear, horror and ugliness- the special aesthetics of ugliness  - and accompany them with intense descriptions of evil and terror. Simultaneously however, the stories become parodies of themselves. The “ugliness” in the stories which is transformed into play - and play with negative side of dreams - nightmares, can be described as obliteration and destruction, “blood and guts”, abnormality and perversity, insanity and treachery, corruption and falsity, loneliness and meaninglessness, annihilation and oblivion. The only way the boys can experiment with these concepts is through play because the reality of their description lies beyond day-to-day comprehension. Monsters and vampires, deformed animals and people who represent evil are the individual elements in a mosaic of pure violence, whose consequence is death: of the evil  The boys are playing out the fight between good and evil. In play, the dolls are monster dolls and guardian dolls (who look after or guard the weak). The guardians can either be evil or good (and sometimes both). The dolls are often caricatures of persons in the stories because features of their personality and appearance are often exaggerated. The ugly ones are extremely ugly, the handsome ones extremely handsome, etc. 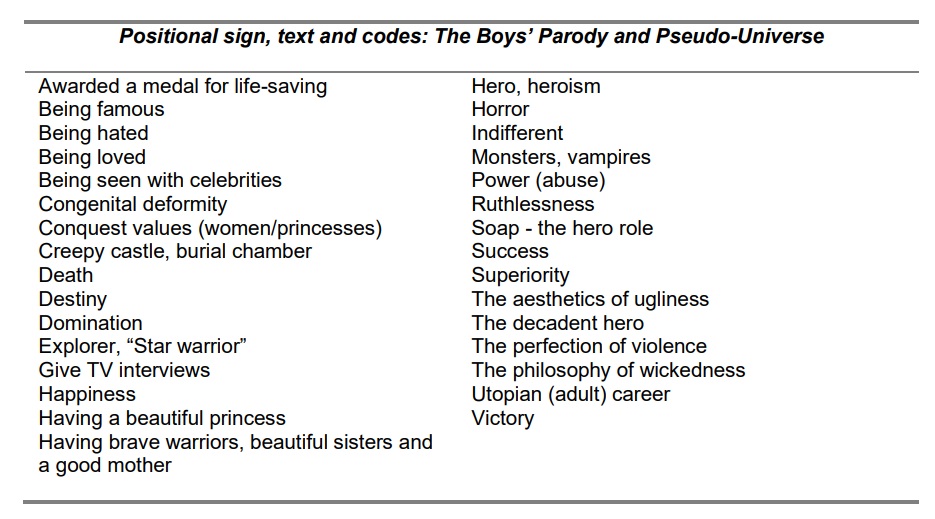