The pseudo, parody and utopian universes

The word pseudo expresses something invented, false, a sham, often mendacious. A pseudo event is an “invented” event which has never taken place but which presents itself as real and true.

For this reason, a pseudo universe is an unrealistic universe which is intended to claim to be something different than it passes itself off for - and makes no attempt to disguise the fact.

In its modern form, the pseudo-doll is a kind of compensation for a personality with a special or interesting universe. The person-at-play might be permitted to enter that universe.

The doll claims to be a familiar figure about whom the person-at-play in her play and dreams has an utopian idea of coming close to.

The universe is often a synthetic pseudo-universe or a parody of one of these. The female dolls most often symbolise invented characters or famous models or idols (e.g. Spice Girls) although a girl/woman doll can also end up becoming a myth. The Barbie phenomenon is the best example.

The term parody covers caricature-like imitation and ridicule of a story (often a story of a serious nature), a special event or a work of music, a song or a tune. Parody twists and distorts the original story or image behind the imitation.

The parody universe pokes fun at people, stories and content. This is intended not only to be funny but, equally importantly, also to get to the bottom of situations and perspectives in a story/narrative in order better to understand and learn how to relate to them.

Utopia is unrealised thought, plans and idealistic dreaming. Something utopian is a product of the fantasy, non-existent and unattainable. The book “Utopia” by Thomas More (1516) describes an ideal state which could never exist anywhere at all.

In the world of toys, utopian dolls are dolls which are placed in invented environments and are therefore often parodies.

On the toy market these doll and toy concepts are represented by fashion toys, the “five minute wonders”. Hidden in play with these dolls is cult idol worship because the dolls are copies either of protagonists in films or of idols. 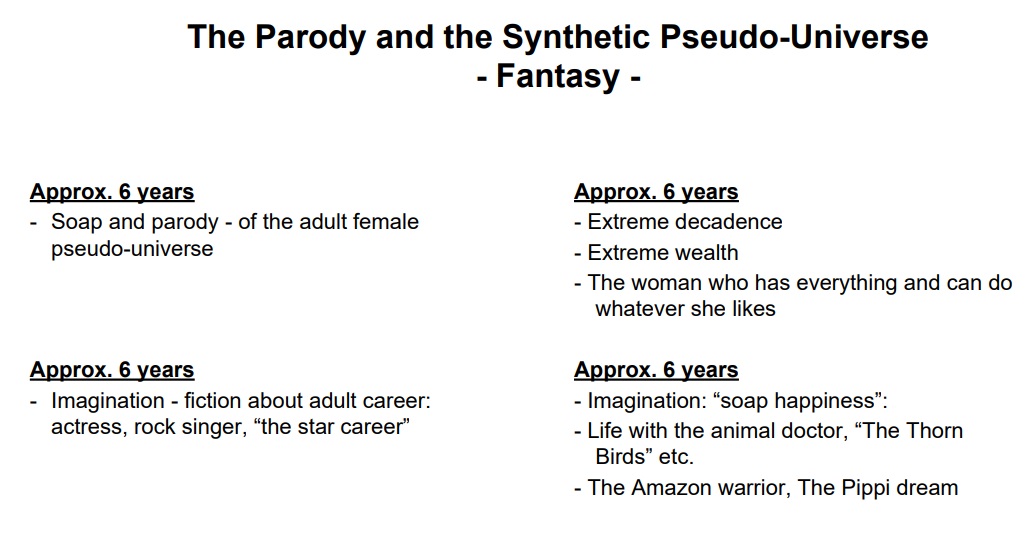 Utopian love and happiness is motivated by concepts such as existence, peace, security, harmony, intimacy and yearning.

By the age of six, girls have gained experience with what goes on between people in a variety of familiar, well-defined environments and in situations they have seen on TV.

These include what happens within the family unit (arguments with parents, expecting a baby, sibling rivalry) and in specific familiar work/leisure environments (coast guard rescue, sick animals, dogs/horses, life at the riding school, sick children in hospital, love/hate and meetings with heroes and other famous people).

The girls are also aware of significant values which are presented in stories about these environments and personalities. The girls’ knowledge and experience of episodes/environments are especially stimulated by TV series but personal experiences of special events also count. The girls’ play and dreams steer towards the love and happiness of the stories.

2. The fantastic (and utopian) career

From the age of about six years, girls’ interest in pop idols and idol worship awakens. Their interest is transformed in play into episodes concerned with theatre, performance or play performances supported by music from their pop idols.

Girl groups naturally have an especially strong position in the girls’ consciousness.

The play and dream universe investigates what it is like to be a public figure, to have fame, to be adored, to give interviews and to be blessed with unlimited success. For most girls, success is a film or pop music career where they are awarded loads of Grammies and Oscars.

Media focus on actors and pop groups strengthens the girls’ interest. The girls dream of becoming a stand-in for their idol or his/her friend.

Pop/idol dolls, which represent the famous idols whose lives and careers can thus be played out, further amplify the girls’ dreams and play. The girls transform every facet into something very creative and extremely experimental.

The idol dolls also give the girls a feeling of the unattainable, i.e. being very close to and almost with their favourite idol.

Decadence is expressed in extreme situations when something has become exaggerated, over-refined or overexposed to the extent that it is developed into something unreasonable on the verge of degeneracy. The girls meet a specifically feminine decadent world in the media - especially in certain TV series and women’s magazines.

The decadent feminine world is new and exciting for six year old girls because it demonstrates some of the disadvantages of feminine desires and dreams about security, safety, adoration and love. Decadence demonstrates what constitutes real abuse of distinct concepts, e.g. extreme wealth, ruthless abuse of power and dominating love.

Love, wealth and power are concepts and attitudes which are very easily recognisable in many TV series where the protagonist always does exactly what she wants: she can buy anything she chooses, manipulates family and friends and relentlessly abuses her friends’, boyfriend’s or husband’s trust, etc.

From the age of six, girls take these scenes and attitudes on face value. They transform them in their role play and games, often with very dramatic content and great emotion.

Playing with decadence as such is part and parcel of the girls’ learning about ethics and morals - about good and evil, right and wrong, the right way to behave under certain circumstances, etc.

Decadence is manifest in older girls’ play with dolls, role play, acting/performances and in their chat and descriptions of their dreams and fantasies.

Glamour is visual and glamour dolls exhibit all kinds of forms of enchantment, sparkle and splendour. Glamour knows no conflict and everything twinkles with a sprinkling of fairy dust.

The glamour doll is a girl who works hard on her outward appearance and has undeniable sex appeal. She is dazzling and alluring, clever and tastefully dressed. She is surrounded by beautiful and exotic things. She wears gorgeous, expensive gowns and is an intelligent and independent girl. She may be a princess and is most often single.

Girls’ dreams and play with the glamour doll involve her owning at least a big house with servants and a park, her own car, plane and boat, possibly her own Greek island or a castle in the mountains. Everything is beautiful and correct, although sometimes tinged with superficiality.

Of the classical glamour dolls, Barbie and some copy products (Sindy, Petra) entirely live up to the glamour ideal. Barbie remains more original and better known than her imitators.

With the glamour environment and dolls, girls move out on the exaggerated perimeters of dreams and fantasy. This is the extreme experimental sphere for the girls’ pseudo, parody and utopian universes. But they present the older girls with the opportunity to dream, fantasise and experiment with an environment which is very different from their everyday lives in the real world. 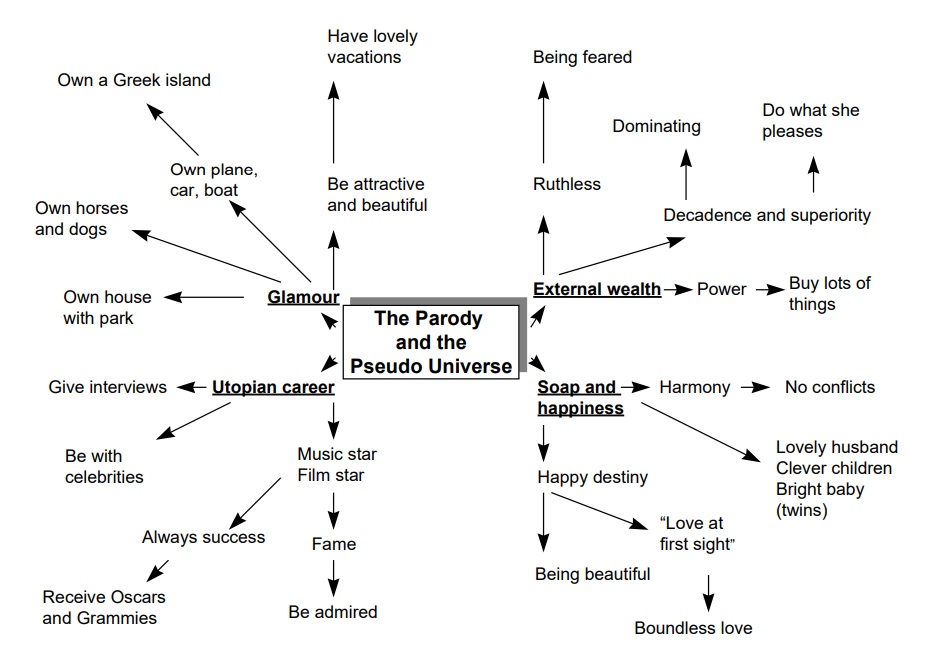