The theatre/drama and fairy tale universe

From the age of about six (although in some cases from 7-8 years), girls begin to be able to abstract from the experiences and routines of everyday events which have interested them hitherto. Instead of copying realistic social events (facts, natural laws, conscious connections, documentation, scenes from “real life” and the world they are familiar with), they move on to converting and developing actions and events into dramatic and imaginative scenes which they narrate or act out as a game or as drama.

There is apparently no limit to the girls’ fascination for creative fantasy, for imagination, for creating illusions, for fantasising, for dreaming and for narrating what could possibly or maybe will happen sometime in the future and for what probably happened in the past. An imaginative array of roles and personalities develops. Striking and familiar kinds of personalities are imitated and copied in the girls’ dramas. Implements and props begin to have magical significance. Even though the story lines of games and theatre follow a recognisable pattern of development (i.e. comparable with classic drama), the girls also compose and invent their own new, dramatic episodes and add them to the narrative.

The girls act out grand and very serious themes, usually motivated by existential questions such as love/hate, peace/conflict, security/insecurity, harmony/discord or a yearning - often for something imprecise!

There are therefore four spheres within this fantasy universe and these will be described in the following. 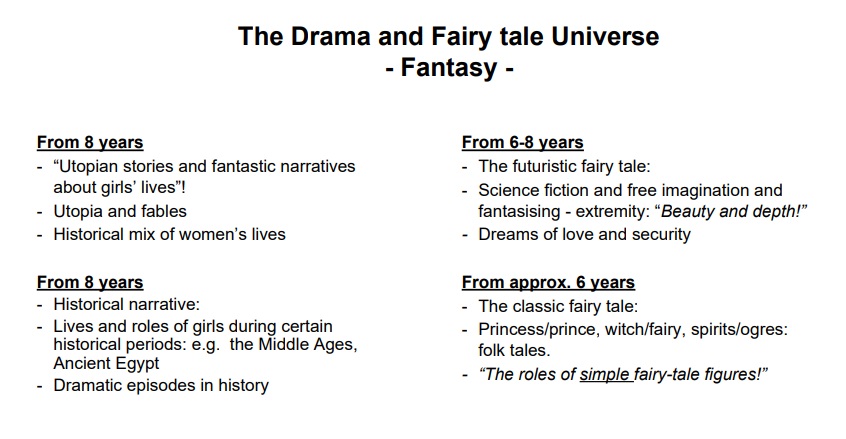 From about six years old, girls begin to be able to understand what is going on “between the lines” in the classical fairy tales where the role list is filled with princesses, princes, kings, queens, wicked witches and good fairies, monsters, dragons, heroes and heroines, etc. The girls slowly begin to comprehend that the patterns of behaviour exhibited by characters in a fairy tale can be symbolic and that good wins over evil and justice is done. The girls retell/act out the dramas and play with the archetypal figures and the stereotype roles associated with them. They learn about new aspects of life and existence through dramatic play.

Furthermore, the girls begin to comprehend that the traditional kinds of classical fairy tales present a certain kind of train of events in contrast to the kinds of harsh, fierce, really strong themes in e.g. folk tales, which are often bloody and brutal.

Children under six also play with the figures they are familiar with from fairy tales but they do not understand fairy tale magic so they give the king and queen father and mother roles and the princes and princesses are just like boys and girls in an ordinary family.

2. Stories as accounts of the past and future

Seven to eight year old girls are quite able to understand that the temporal dimension can point ahead to the future or back into the past. However, girls of this age still find it difficult to differentiate between the various historical and cultural eras but they are very interested in what happened in the past. Their interest focuses in particular on what life was like for girls of their own age at certain, specific periods in history. The girls’ understanding of historical themes can be strengthened if they are introduced to situations in history which they can easily compare to familiar situations in their own everyday lives. However, the girls can transform specially exciting, dramatic episodes, parallel vital events such as births, school, being the daughter of a well-known personality, meeting something familiar in another time and the use of implements which have not changed significantly in the interim into dramatic play and situation drama.

The futuristic fairy tale is extrovert and focuses on surroundings and external events.

At this age (6-8 years), girls begin to dream and fantasise about how exciting things might be in the distant future. Their fantasies (from about 8-9 years old) about how life will be for a girl in strange surroundings in the distant future are full of the familiar visions of science fiction - a paradise in pastel colours and deeds well done with animals and small lonely children on far-off planets where life stands still and there is space for boundless love. (This is, incidentally, quite different from the fantasies of boys of the same age whose science fiction world is filled with battles with beastly enemies who possess an terrible arsenal of heavy weaponry.)

The futuristic fairy tale with its magic and unpredictability stimulates the girls’ creative thought, urges and dreams.

4. Utopia and the incredible myth

An utopian world focuses inward on Nature and the senses and especially on the existential basis for life and existence as girls in their own world. This universe is very abstract and requires fantasy and imaginative powers because it is the universe which is furthest removed from the familiar/reality. The girls do not begin to dream and fantasise about this until they are 8-10 years old and when they do, their fantasies take the form of a journey into a strange world, e.g. a world of beautiful plants and animals. It is often a journey into the middle of a beautiful flower where the girl is able to sense something fantastic and incredibly beautiful.

Girls of this age who narrate and play with these extreme universes often find it difficult to identify toys and objects which can stimulate this particular world of play and dreams. They tend to seek out things in Nature which can satisfy the needs of this form of fantasy play. 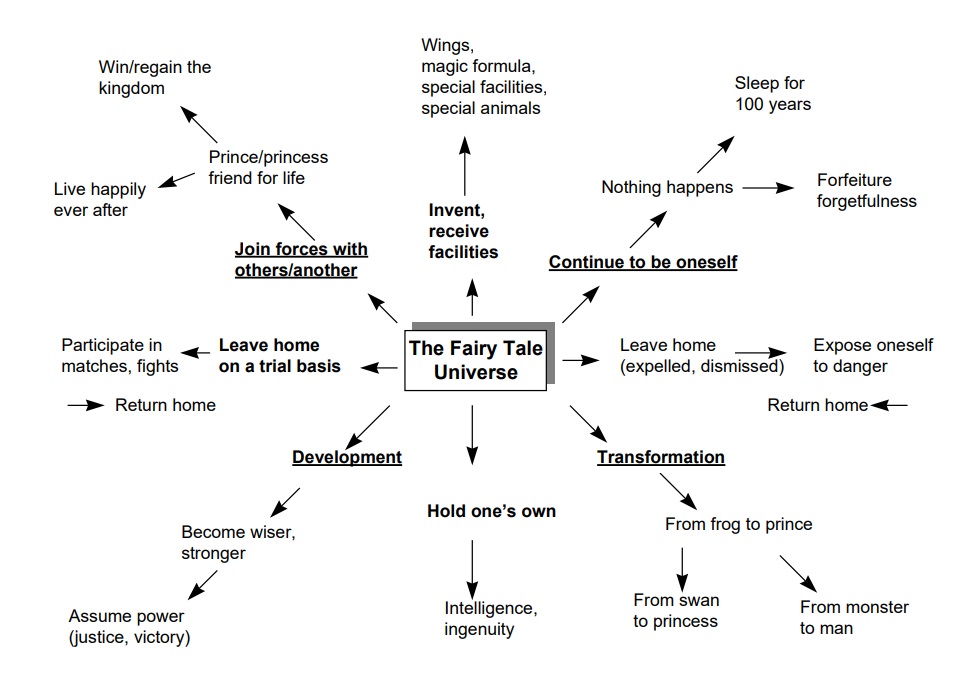