Education is described in detail in Part III Play.

Upbringing is an educational process through which the person-at-play who is subject to external social and cultural influences accepts or adopts certain merits. I take the liberty of pointing out that these merits are the direct result of the education process through play with toys.

However, we cannot be sure that the person-at-play is always in possession of education when he is playing because, as mentioned in Part III PLAY (Play and education), the following factors - selection, self-reflection, autonomy, wonder and zest of life - must be present if education is to take place at all.

In play with dolls and the dolls’ universes, the person-at-play adopts some merits but adopting these takes place via experiments, manipulating with rules and testing out values and possibilities.

For children from the ages of 3-4 years, this process can almost be described as general education. Older children who play with more sophisticated characters have more opportunities for playing and experimenting with other forms of education, ranging from the classical, humanistic and maybe also academic or polytechnic education, depending on the type of toy and degree of difficulty.

Education is therefore a merit which the children gain through play processes and during the period of time spent on many, widely different episodes. In this way, education in play with toys is the opposite of the processes which in recent times we have called “soap”.

“Soap” is the result of an overexposure of a narrative’s and a situation’s meaning and value.

As in parts of the media, in play a child will often wade around in a morass of melodrama and sentimentality and in situations which for the protagonists and the dolls represent sweetness, cruelty and injustice. Examples include TV series for adult viewers such as “The Thorn Birds” and girls’ comic books like “Penny” and, in the world of books, “The Junior Doctor” and “Anne of Green Gables” series.

In soap opera the distance between sentimental and grotesque is minimal - and soap opera very often verges on parody.

The soap genre is to be found in all cultures and in many different forms depending on culture. It is most often associated with describing people’s development processes. Values and emotions are presented in a very feminine and emotional manner so that positive and negative conflicts in the events appear in a clear and unequivocal way. Soaps can therefore be quite trivial, conforming and stereotype.

And this also applies to what happens to the children’s, and especially girls’, play. Through play and experimentation with conformity and stereotypes in the themes of play, the children learn to understand how things really are. 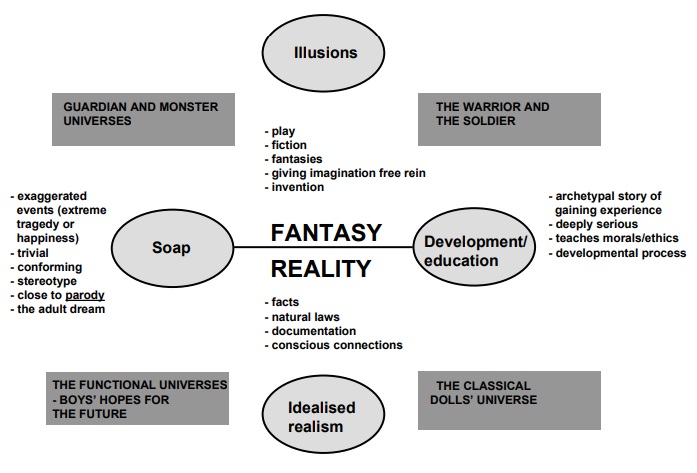 Soap as a genre is unshackled, free fantasising. Play is also free fantasy with unrealistic soap dreams and soap opportunities. These games enable the girls to plan, test out and experiment with roles, events and conflicts so that they play out parodies which almost make fun of the opportunities soap represents.

Play with Barbie and LEGO SYSTEM Belville is inspired by the girls’ experiences with soaps because these products clearly signal the ethereal, rose-pink and eventful girls’ feminine play universe.

Previous models for dolls and the dolls’ house universes refer naturally to events in a realistic or fantasy world. However, play with dolls and dolls’ houses can also be attributed other merits - i.e. as with the extremes of soap and education.

For some adults, seen from a cultural perspective, soap is “bad taste”. For others, soap is a form of entertaining triviality. For children, soap is simply a source of communication and inspiration on the same level as so many of the things they experience, watch and discover in the various media. Where children are concerned, interpretation of quality comes in only much later. 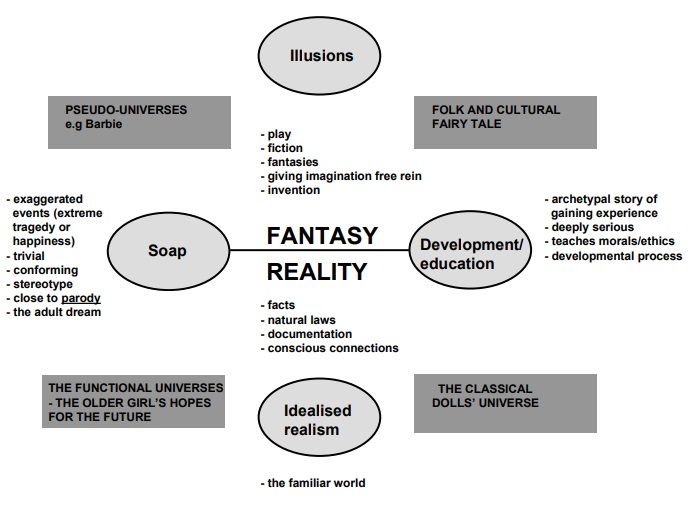 In the following we will describe two concepts which contain the 20th century’s most famous dolls: Barbie and GI Joe.