A really good, narrative doll is one which succeeds in getting the child’s comprehension of the doll to correlate perfectly with the experience of playing with it.

The mainstays of play in the classical doll universe are also found in the other doll universes. The mainstays are built on the foundation of traditional developmental and behavioural theories which focus on children’s upbringing and formation (see chapter 9).

The mainstays of play in the classical doll universe are social and family values. It is vital that the child assimilates these values. Children begin to assimilate them through play from the ages of 2(3). Assimilation generally takes place between 2(3) - 5(6) years and is accomplished through play with dolls and with other children in a variety of doll universes.

Play is constant experimentation with values. The child tries to tie values into the doll families in their doll universes and compares the values with his own experiences from his own home and familiar situations in the family sphere.

Naturally, the child gains his first experience of values from the classical doll universe (playing “mothers, fathers and babies”). He will later transfer his experiences with family values to other the universes (with the exception of some few “synthetic pseudo-universes”, where e.g. Barbie doesn’t have a family).

Figuratively speaking, these values encompass the dolls and the doll families within the children’s games but play is, in fact, simply a reflection of the child-at-play’s own family circumstances. Thus the person-at-play’s own personal circumstances are conditional upon his or her personal and individual value systems which are demonstrated in play at three levels. See next model.

Classical, traditional play with dolls is quite “trite”, e.g. “baby won’t go to sleep”, “the dog has run away and we are afraid he got run over” - “Daddy doesn’t want to do the washing-up” - “big sister is in a bad mood and has a row with Mum” - “birthday” - “some very nice friends come to visit”, etc.

Similarly “trite” situations are found in other dolls’ universes (both boys’ and girls’). 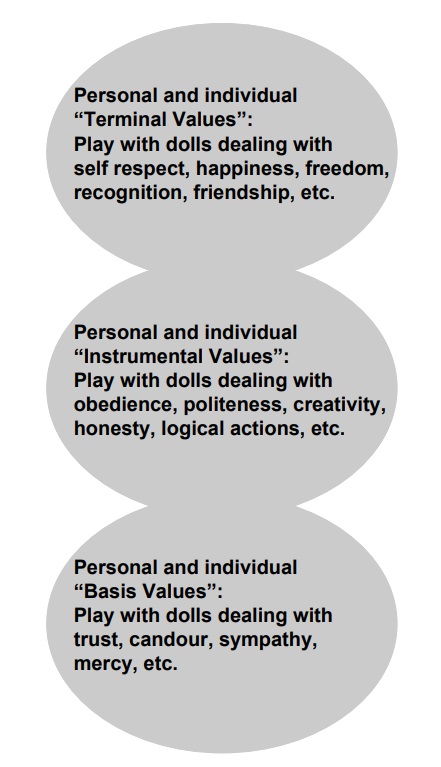 Play with the value systems of the immediate surroundings

Children also play and experiment with the “dolls’ home environment” and the local environment’s value systems - and this applies to the classical dolls’ house, Barbie’s fashionable dream villa, a princess’ fairy tale castle, the tiny homes of elves and fairies, the witches kitchen and the teenage girl’s riding school or to the boy’s garage, farm, fire station, knight’s castle, fort and moon base.

The “dolls’ house” (family home) values - and play and experimentation with these - depend on the functional opportunities of the “home” or house and the rules for their use.

These functional values and opportunities include: 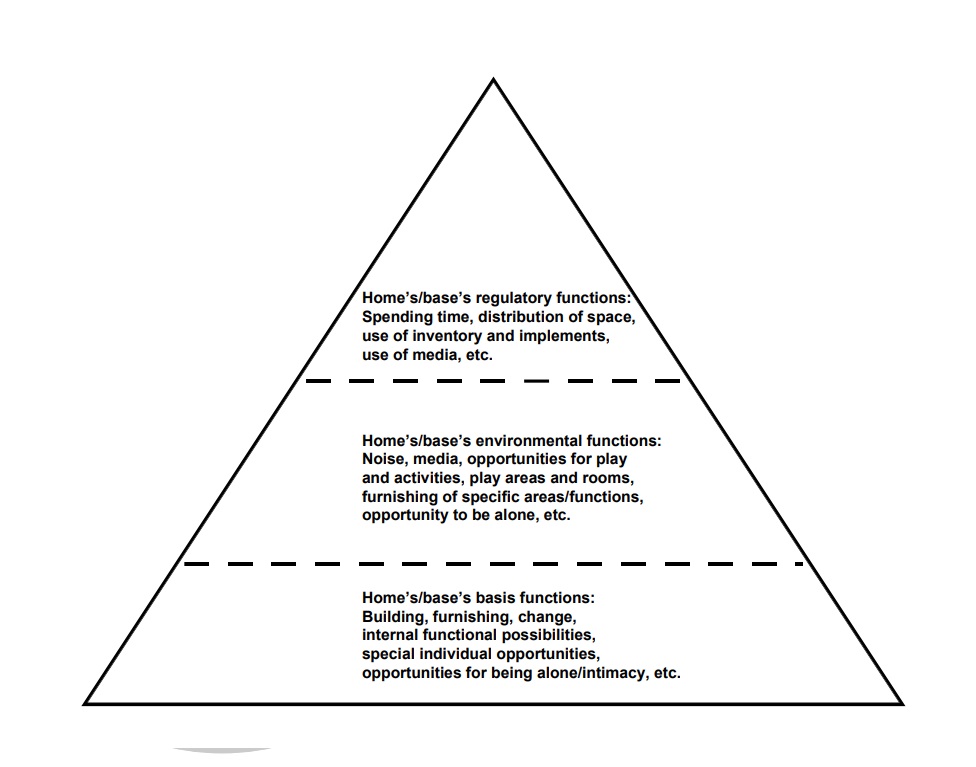 What we’re talking about here is how far the doll’s house or base is flexible enough for play - that it is easy to build (if it is made up of small pieces which have to be put together), whether it can be changed, rebuilt, etc.

Very flexible dolls’ houses seem always to be the ones the children find most interesting. With the classical dolls’ house, children play at “building a new house inhabited by mummy, daddy and children” or they play “we’re getting new furniture” - “we’re decorating the bedrooms for the girls” - “baby’s room” . “big sister is happily playing on her own” and functions such as “cooking”, “bathing baby”, etc.

Play and experimentation with these values form the basis of the narrative of play, its “text”, the situations and episodes, events and progress. However, some dolls’ universes’ texts are more static than others’.

There are, for example, limited opportunities for using the multitude of comprehensive relationship values in toy concepts in the form of “synthetic pseudo universes” (Barbie) for girls or in some of the guardian doll and monster universes for boys.

The “five minute wonder”, stereotype and trivial are characteristic of these toy concepts. Naturally and fortunately children do play with these at some time in their childhood because these toy narratives are undoubtedly a precondition for the children’s forming a basis for recognition and a mutual comprehension of the mutual relationships between objects and society’s norms.

There are four spheres in the dolls’ - and the person-at-play’s - social and interrelation values:

Within these spheres, play is infinite and unlimited as long as the person(s)- at-play regard(s) the dolls as identical with play with them. (See chapter 15 on Relationship values and modern childhood - which texts the classical dolls’ universe with “mummies, daddies and babies”-play).

Roles and regulations - associated with the dolls’ mutual interaction and social relationships - are very limited in some play concepts and dolls’ universes. There are several reasons for this lack but the most frequent cause is the stereotyped gallery of persons, dull characters with only limited scope for action in a limited, simple narrative. Another reason is simply that the figures are poorly designed.

Some guardian and monster dolls for boys are so overdone that, despite their ugliness and lack of parody, they suggest no useful patterns of action which the boys can transform into play.

Some girl dolls and fashion dolls in toy concepts targeted at girls are merely decorative or exhibition dolls - they have no character or “personality”.